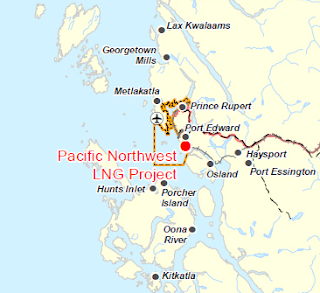 A news release from the Canadian Environmental Assessment Agency has set the wheels in motion to move forward the process of review for the first of the proposed LNG terminal developments for Prince Rupert.

The CEAA outlined the steps to come in examination of the proposal from Pacific Northwest LNG with this Public Notice  of February 19th, advising that the the first of the deadlines is fast approaching on March 11th.

As part of the modernized Canadian Environmental Act of 2012, the CEAA is in the process of determining whether a federal environmental review is required for the proposed project.

Towards that decision, the CEAA is currently seeking comments from the public on the project and its potential effects on the environment.

Those comments must be submitted to the CEAA by the March 11th deadline, after that date the Assessment Agency will determine the steps moving forward, posting a decision on its website stating whether a federal environmental assessment is required.

Should the CEAA decide that a full federal environmental assessment is required, the public will then have three further opportunities to comment on the project, as required with the public engagement aspects of the legislation of last year.

The news release can be found here, with a full summary of the project description also available for review.

Further particulars from the CEAA can be found on their reference page for the project, including contact information for those with questions or looking for more information.

The Pacific Northwest LNG project is the proposed Petronas/Progress Energy development, which would feature a shipment terminal on Lelu Island. As we outlined back on December 4th, their plans included the initial investment of 9 to 11 billion dollars, as well as the prospect of larger investment possibilities.

The first step towards that possible development is now underway, the March 11th deadline will provide for the first of the benchmarks that Pacific Northwest LNG will see along the way, the CEAA to determine at that time the scope of the review ahead and the timeline that it will follow.

The announcement of Tuesday, came on the same day that NDP MP Nathan Cullen outlined his thoughts on the topic of LNG development, expressing in an article in the Northern View his doubts that all of the proposed LNG developments will proceed.

You can review all of our items on LNG development in the Northwest from our Industrial Development Archive.

Media review of items on the Assessment