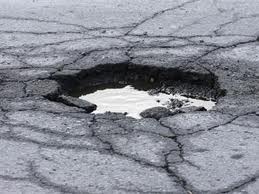 With the spring thaw about to arrive in many communities, this may be one year where a pothole report to your local city or highways yard will find prompt attention.


The CBC has an interesting piece on how ICBC has taken to the civic legal action to get recalcitrant road maintenance groups to be a little quicker on the maintenance side of their job descriptions.

Weary of insurance claims from unfortunate motorists who have been swallowed by potholes on the Coquihalla Highway, ICBC has filed a civil claim against VSA Highway Maintenance.

In it, the Insurance provider is seeking reimbursement for claims money paid out to 19 policy holders, who had their cars damaged after hitting some very large and unmarked potholes near the toll booth of the Coquihalla.

ICBC has claimed that the road maintenance company was aware of the pothole situation, but had failed to deal with it or to warn the public about the dangers of the road conditions at the time.

The issue of road maintenance is always a hot topic across the province, especially in the winter months, the Coquihalla in particular, owing to its heavy volume seems to be a road that is frequently mentioned when it comes to road maintenance.

But there are issues in the Northwest as well. One year ago, the District of Port Edward outlined it's concern over road conditions in the Terrace region, expressing disappointment at the work provided by Nechako Northcoast, which is the contractor providing road maintenance on the eastern side of the O'Brien's service border, roughly the last sixty kilometres or so on the way from the West into Terrace.

We're not sure if this is a one off by ICBC to get the attention of the province's road maintenance companies, but we're pretty sure that this is one time that the majority of BC residents are on the side of the insurance provider, especially in their quest for better maintained roads across the province.

If in the weeks to come we notice the City of Prince Rupert work crews and the folks at O'Brien's road maintenance are quick to their potholes, one would imagine that the goal of keeping off of ICBC's bad list, might be playing a bit of a role in all of that proactive pothole filling.