WestJet Encore takes a pass on the Northwest for now

The much anticipated roll out of the new WestJet Encore service has been made and for hopeful air travellers of the Northwest, the news wasn't quite what they might have hoped to have heard. 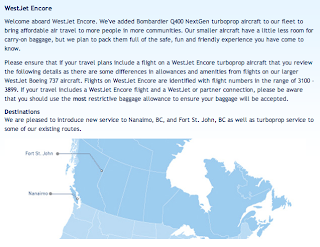 On Monday morning, WestJet Encore outlined the 28 destinations across Canada that will be served by the new airline, most of which can be found in Alberta, Saskatchewan and more populated areas of British Columbia, the airline takes to the air on June 24th. 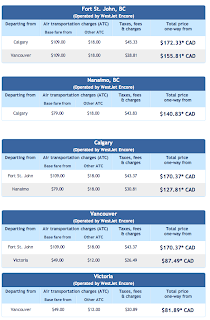 The Calgary based airline which had the air travel world buzzing with potential destinations in the last few months revealed the British Columbia destination board this morning and while Nanaimo, Victoria and Fort St. John (see fare tables here) will see the new airline arrive at the gate, the airports of the Northwest will remain in a holding pattern perhaps until the next round of route announcements once the airline has been up and running for a while.

As we outlined previous on the blog, the airports of the Northwest had made their submissions to WestJet hopeful of making the first cut for service, with only so many destinations to announce this morning, the competition was clearly tough.

High volume communities such as Fort St. John which features two flights from the airline (one to Calgary and one to Vancouver), seemed to be the front runners, with WestJet Encore looking to find its niche in areas where travel demands in growing communities weren't perhaps being met as best they could. 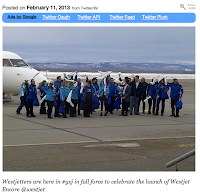 Fort St. John will go down in the trivia books as the first announced destination of the new airline, which released its other destinations through the day.

The airline gave no actual timetable as to when the next round of announcements will be made, or if the possible destinations will again have to make submissions of interest.

WestJet Encore did  however advise that future destinations will be announced as aircraft become available.

"We are just getting started," said Ferio Pugliese. "The communities that are not part of today's announcement continue to be under consideration as we take delivery of additional aircraft later this year and in the years to come." -- Ferio Pugliese Executive, Vice-President and President WestJet Encore, outlining some of the background on today's WestJet Encore announcement

For now, the Northwest will continue to rely on Air Canada Express/Jazz and Hawkair for their travel requirements to and from Vancouver.

You can track some of our past items on the quest for WestJet from our Air Transportation archive page.

We'll provide some background on the airline's roll out below:

Email ThisBlogThis!Share to TwitterShare to FacebookShare to Pinterest
Labels: WestJet Encore flys over the Northwest for first destinations