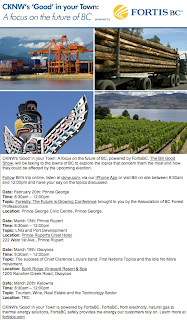 One of British Columbia's best known broadcasters is hitting the road, seeking to learn more about development around the province, a tour which will feature a particular focus on Northern and Northwestern British Columbia.

Bill Good, host of The Bill Good Show, one of the province's most popular talk shows, has just started a cross province journey, with a Prince Rupert pin on the map for March 12th.

In addition to his planned trip to Prince Rupert, The CKNW talk show host, has set aside three other journeys through February and March.   Taking  his Good In Your Town series to Osoyoos, Kelowna and Prince George.

At each stop along the way he will broadcast his top rated talk show live from the community, learning more about the topics of concern of each stop and with a focus on development and the future.

The Prince George leg of the tour took place today, with the main focus being on the Forestry, the growth of the Prince George region and the future of development in the Northern Interior region.

A portion of the discussion on the program today featured the importance of the Port of Prince Rupert on development of resources and as a job provider for the Prince George region.

His arrival was previewed in the Prince George Citizen on  Monday, outlining some of the scope of what the sessions are all about and giving us a glimpse as to what we may expect upon his arrival in March.

Broadcaster to sound off from P. G.

You can also examine the Prince George show from the CKNW Audio Vault or Podcast page, the entire show from 8:30 to Noon is included for your review.

His planned trip to Prince Rupert and broadcast across the province will be hosted at the Crest Hotel, with LNG and Port Development the main theme of his stop in the city, a community where he began his broadcasting career (with CHTK) back in 1965.

The LNG theme, Port Development, as well as the Enbridge Pipeline issue, have all been items one of much interest to Good over the last few months. They frequently have been the topic of discussion on his program and to give you a bit of a primer of the focus of his program in Prince Rupert, you can review some of those programs (listed below) from the CKNW archives (using this audio player).

The format of the program, being a talk show, is of course discussion. With many guests, ranging from industry principals, politicians provincial and municipal and concerned citizens, all engaged in lively discussion that helps to bring the topic to public attention.

These community visits however, don't appear to provide for much of the open line aspect of a usual Bill Good show, making it more of a magazine type program for these visits.

Considering the current debate in the community over the prospect of LNG and Port development, his program on the 12th of March may make for the most concise review of the issue for all of us to share in.

It also provides the opportunity for both municipal politicians and those seeking the vote of the North Coast in the upcoming provincial election, to perhaps offer up their thoughts on LNG and Port Development in the community.

The Bill Good Show is available on line through the CKNW website daily from 8:30 to Noon. The talking points for each show are available here.

Archives of the show are kept on the website (see links above), as well as through the iTunes podcast application.

Note: The item above has been edited from its original form to reflect the change of date in Mr. Good's trip to Prince Rupert, originally listed as March 12th, the new date for the North Coast stop on his tour is now Tuesday, March 12th.