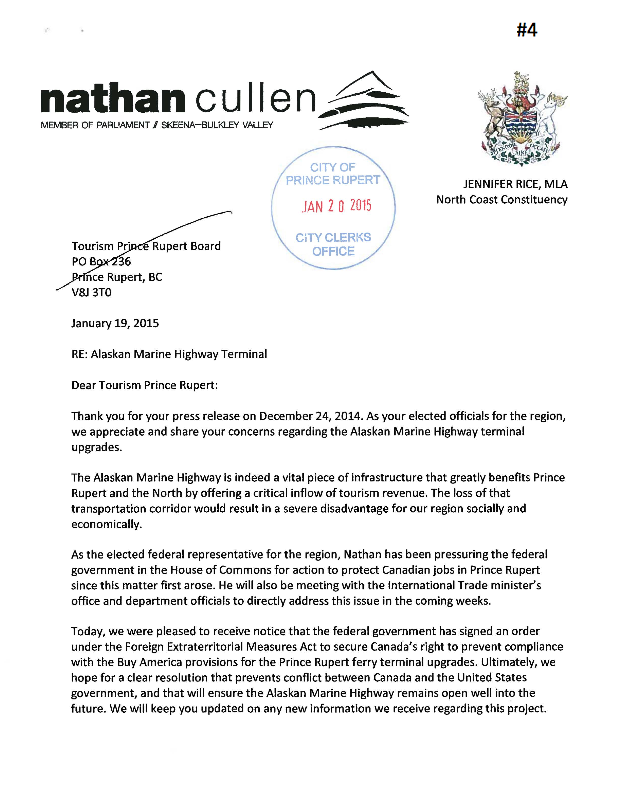 A January letter to the Tourism Prince Rupert Board from both MP Nathan Cullen and MLA Jennifer Rice offers up a look at how the senior elected officials for the region were viewing the controversial Ferry Terminal project at the time.

The correspondence dated January 19th, for the most part, highlighted the steps that Mr. Cullen in particular had taken regarding the proposed redevelopment of the Terminal at Fairview Bay in Prince Rupert.

The key passage regarding Mr. Cullen's efforts included this observation:

As the elected federal representative for the region, Nathan has been pressuring the federal government in the House of Commons for action to protect Canadian jobs in Prince Rupert since this matter first arose. He will also be meeting with the International Trade minister's office and department officials to directly address this issue in the coming weeks.

In their letter to Tourism Prince Rupert, Ms. Rice and Mr. Cullen also make note of the moves taken by the Federal Government in mid January, making use of an order under the Foreign Extraterritorial Measures Act.

That decision sought to secure Canada's right to prevent compliance with the Buy America provisions for the Terminal upgrade.

Those that would disregard the order from the Federal Government, would be subject to the following fines and conditions.

The letter from the MP and MLA was also distributed further to City Council members as part of their January 28th Information to Council review.

They end their letter with a hope for a clear resolution that prevents conflict between Canada and the United States government, and that  will ensure the Alaska Marine Highway Remains open well into the future.

The pair of Northwest politicians also advise that they will keep all of the local stakeholders updated on any new information regarding the project.

Since that Cullen/Rice advisory was first delivered to Tourism Prince Rupert, the State of Alaska announced that the Terminal renovation project had been cancelled.

The Governor later in January then expressed the opinion that the project should go ahead at some point, but outlined the need for a cooling off period before the State will revisit its plans for the project.

In the wake of those announcements out of Juneau, neither Mr. Cullen or Ms. Rice, have made any follow up comments regarding the latest developments.

Offering up no further thoughts as to how close the two sides may be towards a clear resolution, or what impact the moves from Alaska may have on the future of the Terminal redevelopment and tourism interests across the Northwest.

You can follow the timeline of developments on the Alaska Ferry Terminal situation from our archive page here.
Posted by . at 10:07 AM