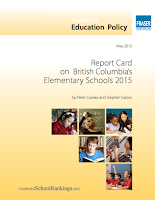 Spring time means it's review time for the Fraser Institute, as the Vancouver based organization once again prepares to outline its findings on education, both at the elementary level and secondary level.

Yesterday the  findings of the Fraser Institute Elementary School Report for 2015 were released, with local results provided for five of the city's schools.

On the North Coast  results from four schools that are part of School District 52 and one review of Annunciation, the Catholic Independent School made up the snapshot for the Prince Rupert area..

The results are compiled by the Fraser Institute mainly through the review of data collected through the Fundamental Skills Assessment Testing on Grade Four students.

The report focuses on the key academic indicators of Grade 4 Writing, Numeracy and Reading. Other indicators compiled by the report look at trends from those schools reviewed as well as characteristics of the students that are enrolled in the school.

However, it is the focus that the Fraser Institute puts on ranking the schools that makes the annual review one of a bit of controversy in the province.

You can review the full report here, the opening remarks that outline how they compile their findings can be found from pages 2 to 8. For this years edition of the annual report, results were compiled and published for 978 schools across British Columbia.

As for the local schools on the North Coast, the results and notes on the five schools that were reviewed can be found on page 56.

Below we have provided the snapshot for each school. as published in the report.

Annunciation found itself with the highest ranking of the local schools on the provincial scene, scoring 7.4 on a scale of 10, which placed it at the 166th spot of the 979 schools surveyed. 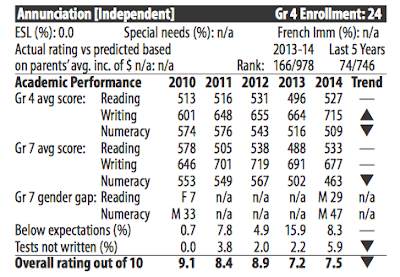 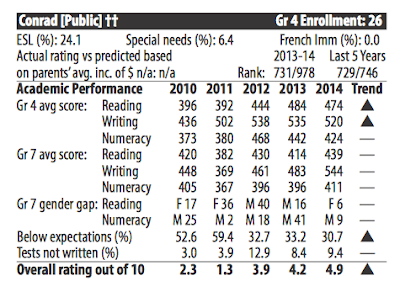 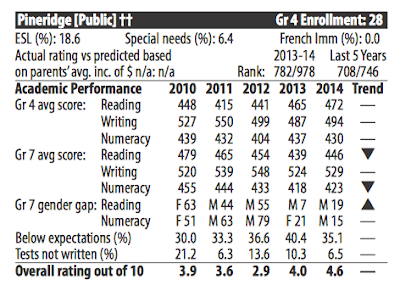 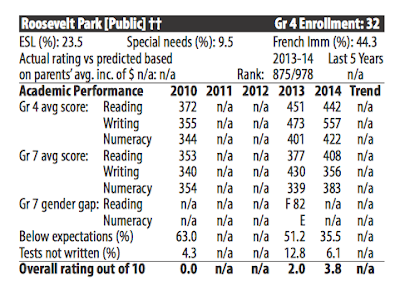 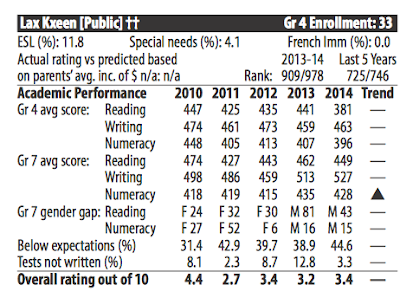 There was no listing compiled for the Port Edward School.

However, there was one entry for Haida Gwaii. 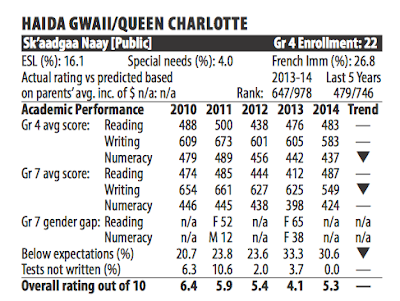 The annual reports aren't particularly well regarded by a large number of teachers, or by the BCTF the union which represents public school teachers in the province.

The narrow focus of the Fraser Institute findings is just one aspect that many educators take issue with,  expressing a belief that little consideration is given to the larger issues that are putting pressures on the education system at this time.

As well, School Districts administrators rarely offer up comments related to the Fraser Institute findings, with many School Districts preferring to refer parents to the Discover Your School website, which provides a fair amount of background beyond just the FSA results.

Included in those reviews are both notes on parent satisfaction as well as for student achievement.

In recent years, the Fraser Institute has seemingly heard some of the concerns related to their reports.

This year, as part of the presentation of their report one of the authors, Peter Cowley has solicited comments, suggestions and criticisms of the public.

With the Fraser Institute seeking feedback on the perceptions surrounding the findings from their annual report.

You can make your contribution to that process through email at peter.cowley@fraserinstitute.org

The elementary report is the first of the two main reviews from the Fraser Institute, the report on secondary schools in British Columbia will most likely be delivered in June.

For more items related to education on the North Coast see our archive page here.
Posted by . at 8:20 AM