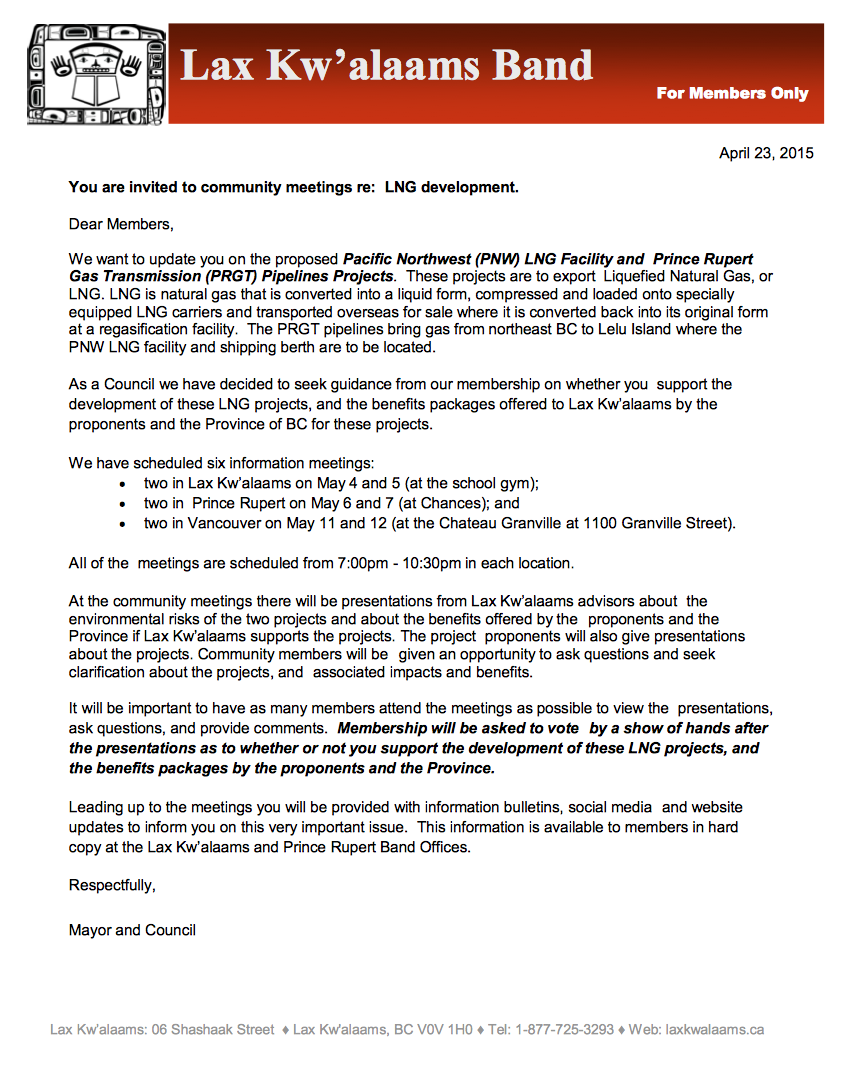 It has been a week that may very well herald a another major shift in the debate over LNG on the North Coast, as members of Lax Kw'alaams First Nation weigh the option that have provided to them by their Mayor and Council related to proposed LNG development in the region

This weekend, members of Lax Kw'alaams will be reviewing some of the material provided to them by their Council, all in preparation for six days of voting on a proposal from Pacific Northwest LNG, Prince Rupert Gas Transmission and the Province of British Columbia.

The proposed arrangement, which is seeking to secure support for the LNG project proposed for Lelu Island, could provide the Band with 1 billion dollars in investment and opportunities spread out over 40 years should they vote to accept the wide range of benefits related to the proposal.

In an Open letter to Band Members from April 23rd, the Lax Kw'alaams Mayor and Council outlined the process ahead for Band members, seeking their guidance when it comes to support for the two LNG related developments.

The first the Pacific NorthWest LNG facility planned for Lelu Island, the second the Prince Rupert Gas Transmission Pipeline project, with extensive benefits packages from both outlined for members of the Band.

Voting will take place at six information meetings between Monday May 4th and May 11th, with sessions scheduled as follows:

In each instance a presentation will precede the show of hands vote, with each meeting scheduled to run from 7 PM to 10:30.

Below are some of the major aspects under consideration as part of a Benefits package outlined by Pacific NorthWest LNG, Prince Rupert Gas Transmission and the Province of British Columbia.

Initial one time payments of the 27,849,00 with the majority of those payments to come upon approval and the signing of preliminary agreements.

Annual payments on a sliding scale over a forty year period

Lax Kw'alaams has been making good use of their community information portal in recent days, using it to seek out more information and to explore potential questions to be raised at the membership meetings over the next two weeks.

Band Members have been reading over the range of bulletins provided by their government through the week, making use of links which have been provided through the Band's Open Facebook account.

Media reviews of the Lax Kw'alaams proposal have highlighted the financial and land use opportunities that will be up for discussion, with a few suggesting that the approach makes for a game shifting moment for the LNG industry and it's approach towards development, not only with First Nations but in the province.

Two of the most thorough of the reviews comes from the trio of Globe and Mail reporters of Brent Jang, Jeff Lewis and Justine Hunter.  The Globe reporters have provided a fair amount of background into the proposal and the impact that it might have on the still to be developed LNG industry.

Their reviews however do make note that the development process for Petronas is still in motion, as they await CEAA approval for their proposed Terminal project before making any Final Investment Decision on the project.

Of interest for Skeena-Bulkley Valley MP Nathan Cullen might be this article from the UK based Financial Times.

It highlights the impression that the Petronas move provides recognition of the need for a "Social Licence" for development, the Social Licence concept is one that Mr. Cullen has been a champion of over the last few years.

The proposed arrangement for Lax Kw'alaams is just the latest move to secure support in the region by the Malaysian energy giant.

In late 2014, Pacific NorthWest and Port Edward announced a 25 year agreement on Property Taxes, agreements were also reached in December with Metlakatla and Kitselas.

And while the North coast still awaits that Final Investment Decision, Pacific NorthWest and its parent company Petronas are clearly far ahead of the rest of the LNG proponents in the region when it comes to engagement with major stakeholders.

More importantly, they are clearly setting a pretty high bar for accommodation and engagement for other would be proponents to consider when it comes to their own plans.

The scope of the Lax Kw'alaams proposal and the nature of the change in the business dynamic that it heralds, is a major theme that has been outlined in a range of other background pieces.

You can review those articles below: