Those of us on the North Coast still have a bit of time before the sound of sleigh bells and reindeer hoofs are heard around the region, offering perhaps a glimpse of a famous red nose guiding the man in Red in the Sleigh to his appointed rounds.

However, in many parts of the world the annual Journey of the North Poles most famous resident has already taken flight with the flight path of Mr. Claus being followed closed by NORAD the joint Canadian-American Air Command which keeps watch on all things in the skies.

As Santa arrives in Canadian and American airspace, jets from air bases across the country will be taking to the air to help Santa reach all destinations on the continent.

With the word from Doctor Bonnie that he's been vaccinated and is able to take to the skies in 2020 it was ready for lift off earlier this morning.

As they do each year, NORAD has provided a link to satellite tracking, giving Canadian and American children just a bit of a heads up as to when they should be in be and the cookies, milk and treats for the reindeer left out.

You can keep watch with NORAD through the NORAD tracks Santa website, with its live look ins along the way.

The NORAD Tracks Santa Facebook page also features some behind the scenes glimpses of the staff on duty for the night as well as range of games and fun activities to take part in while Canta works his way around the Globe.

NORAD caught a glimpse of Santa as he departed the North Pole hours ago, beginning his whirlwind 24 hour trip around the globe that ends as he hits Hawaii.

As of the Noon hour in Prince Rupert, the flight plan so far has taken Santa to Eastern Russia, Australia, New Zealand, China and much of Asia with the Jolly Old Elf directing the Reindeer guiding system to points west. 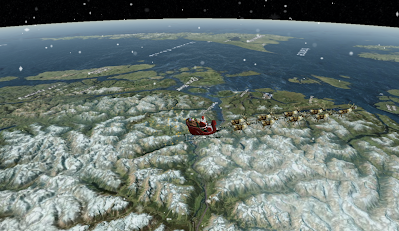 
He sprang to his sleigh, to his team gave a whistle,
And away they all flew like the down of a thistle.
But I heard him exclaim, ere he drove out of sight—
“Happy Christmas to all, and to all a good night!”