The organization representing the unionized workforce aboard the BC Ferrie's fleet has released some of the details to their ratification vote, which has affirmed approval of he membership towards a new five year deal that secures labour peace during the upcoming post COVID economic recovery period.

The balloting on the deal began on December 14th, with certification announced on Tuesday the 15th, after just under half of the 4,153 ballots were retuned by the deadline.

The contract settlement was accepted by 1,131 of the 2,003 workers who returned a ballot. 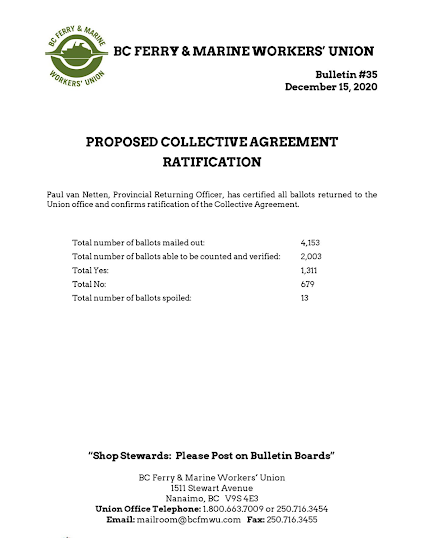 Other than the wage increase levels few other details related to the contract have been released.

The key salary features note that under the now ratified deal, the ferry workers will not receive a wage in crease in the first year of the five year agreement.

They will however be up for two percent hikes in years two and three, with the opportunity to negotiate a further salary increase in years three and four.

The new contract will remain in place until the end of October 2025.

You can review more notes of interest on Marine Transportation on the North Coast from our archive page here.