The Province of British Columbia provided an update on their efforts towards increasing internet connections in rural and Indigenous areas, and a project that involves Prince Rupert based CityWest was one of the connection projects marked for special attention.

In the review, the connectivity upgrade in South Hazelton  was noted for having brought new possibilities to people living in the community as the Gitxsan Development Corporation works to transform the site of a former sawmill into an economic hub employing more than 100 people in the region.
Two major manufacturing plants have been proposed for the area and all Gitxsan businesses are relocating their offices there as part of an effort that would not be possible without high-speed internet access.
“Internet access is fundamental to the way we do business today, especially during a time when the COVID-19 pandemic has challenged the usual way of doing things. We appreciate the work of CityWest Cable and Telephone and the support provided by the B.C. government to bring connectivity to South Hazelton. We are working hard to grow the economy and create jobs that support families along the Skeena. Grants from the Connecting British Columbia program have played an important role in this effort.” -- Kelsey Harmse, director, strategic initiatives for the Gitxsan Development Corporation. “
Funding under the Northern Development Initiative Trust’s $50-million Connecting British Columbia program, announced and funded by the Province in March 2019, began accepting applications for rapid response grants in April 2020.
By September 2020, 47 projects to improve the performance and reliability of internet access in rural and Indigenous communities were completed.
You can learn more about Tuesday's overview of the rural and Indigenous internet initiative here. 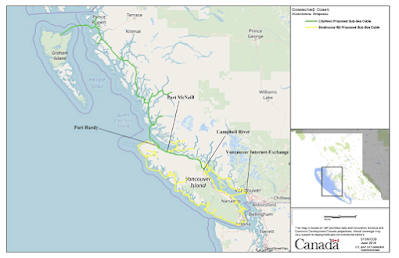 CityWest is also involved in a major internet project called Connected Coast that will provide for services to Haida Gwaii and Vancouver Island, as well as to provide for additional connectivity for the company's subscribers across the Northwest.
In October, CityWest outlined that the somewhat delayed project was now back on track, providing some details on what is ahead for the ambitious connective plans.
For more notes on CityWest see our archive page here.
Posted by . at 9:05 AM