Not So Glad tiding's of ongoing Turbidity to you 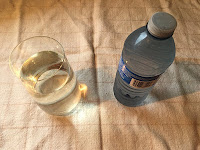 As the City of Prince Rupert and City Hall head towards the holidays and the near two week services closure, the ongoing issues of turbidity in the city's drinking water has made for a reminder for the public on Friday.

Please note that due to continued high turbidity, the Water Quality Advisory issued October 31st for the City of Prince Rupert’s most sensitive water users remains in effect. Northern Health recommends that children, pregnant women, the elderly and persons with weakened immune systems drink boiled water at this time. Please note this is the lowest level notification, and is issued as a precautionary measure.

There is currently no evidence of increased risk to water users, and testing is being conducted to continually monitor water quality and adjust recommendations accordingly. This advisory will remain in effect until another public notice, amendment or rescindment is directed by the Drinking Water Officer at Northern Health Authority.

The cause of the ongoing difficulties is believed to be the ongoing heavy rainfall of the fall and the use of the Shawatlans Lake source  both of which are the contributing factors to the increased levels of the turbidity.
The City also repeats a previous reminder on the need for flushing for Residences and Businesses that may contain lead in private Home and Commercial plumbing.
The full review of warnings and notes on the civic issues, including the city's upcoming infrastructure plans can be examined here.
Residents of Prince Rupert have been under Water advisories on and off since August.
Past notes on City Council Discussion themes can be reviewed here.
Posted by . at 3:23 PM