Winds making for some power bumps, travel delays and swirling whitecaps on the harbour

As the approaching Wind and Rain begins to make its presence felt around the North Coast, there are. a few impacts being noted around town, with some branches and debris being blown around city streets to the visual of white caps as seen above on the water in Prince Rupert Harbour.

The early stages of the storm have also seen some power bumps reported in the region, with the power going on and off a few times through the late morning and early afternoon.

The conditions of the morning resulted in the City of Prince Rupert to close the Ridley Island Road landfill site just after the noon hour. 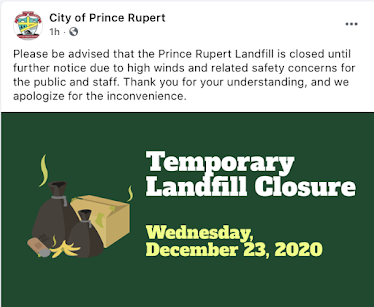 Air Canada's Daily flight to Prince Rupert from Vancouver has seen a delay as well, with the YVR Departures listing showing the North Coast bound flight a bit  less than an hour behind its scheduled departure time.

The story of that flight can be reviewed from the YPR Flight Tracker program below. 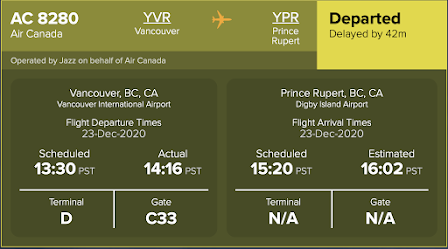 As for the highway, so far the conditions on Highway 16 to Terrace and beyond are still drivable with snow and compact snow listed for the Highway reports so far, that of course subject to change as the anticipated 60 cm of Snow begins to arrive.

For a look at past weather events on the North Coast see our archive page here.