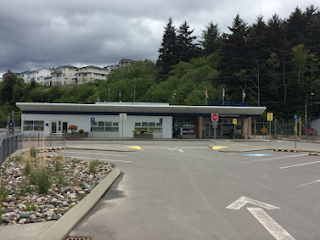 With another marine system bearing down on Haida Gwaii and the North Coast, BC Ferries has issued a Service Notice, advising of a revision to their plans for New Year's service for the Prince Rupert - Skidegate run.

In their advisory of this morning, BC Ferries notes:

Please be advised that due to adverse weather conditions in the North Coast area, the Northern Expedition will be operating on a modified schedule as noted below.

This revised schedule is in effect as a result of adverse weather in the Hecate Strait.

As a result, the Northern Expedition will depart Skidegate at 4 AM Friday, arriving at 10 AM at the Fairview Terminal in Prince Rupert, the vessel then will turn around for it's southern leg to Klemtu and points south at 1 PM, arriving in Klemtu at 9:30 PM and Bella Bella at 1 AM on Saturday

Environment Canada has issued a Marine Storm Warning for the waters of Hecate Strait, with winds increasing to near 30 knots by noon on Friday and seas of up to 4 metres at the height of the storm.

You can review the full advisory from BC Ferries here.

For more notes on BC Ferries on the North Coast and Haida Gwaii see our archive page here.