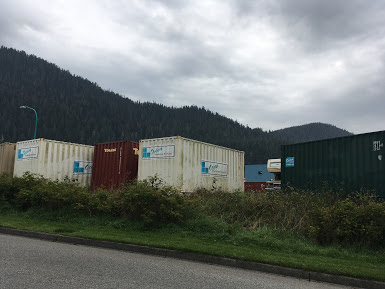 What has become an off and on discussion on Shipping Container usage in the city resumed at this weeks Prince Rupert City Council session.

With both Councillor Wade Niesh and Barry Cunningham providing for the bulk of the discussion on what to do about an increasing amount of use in the community.

As we outlined on Thursday, the container issue became part of the conversation on zoning themes related to the discussion on the new Official Community plan.

Wth Councillor Cunningham leading off the discussion seeking clarification from the city's contract planner Rob Buchan on the use of containers in the community, a topic that led off a wide ranging overview from the council membership.

Mr. Buchan, who has been working on the OCP work for much of the last year observed that they had decided to limit the use of the containers to those areas designated as M2, M3 and M6 zones a solution that took into consideration concerns over locating the containers too close to residential areas. 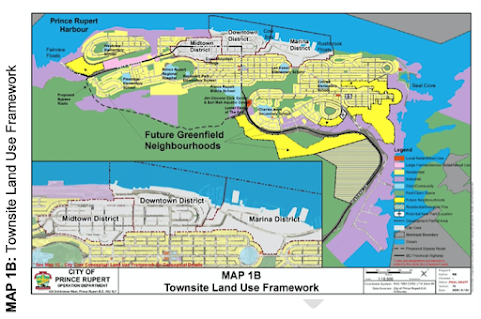 The topic of shipping containers was also one of Councillor Wade Niesh's concerns, who noted that they had previously discussed the topic back in the days when the city had Zeno Krekic on staff as the city planner.

"We have had workshops on the past when Zeno was still our planner and we were kind of moving forward towards having shipping containers in the M1 ... but there was supposed to be regulations related to painted to match the primary colour of the building and that was kind of the direction we were working in and I really do feel that this is going to have a big effect on business owners that have containers on site already"
Mr. Niesh also made comment on past decisions by previous councils on the concept of land use and how the current council will have to address them expressing his strong opposition to the exclusion of conatiners in areas of M1 zoning.
"Let's just say one thing, whoever planned putting a light industrial area in a residential area, was a bad decision in the first place, but we can't change that decision now, that was done a long time ago. And now we have to make sure that we work with those businesses in that area and the residents around that area to make that work.
I have really big problem with containers not being allowed in the M1 zone, I think that if we were to once again paint them the same as the building and they're done properly, not with containers stuffed randomly on site, but someone who is looking to use it as a permanent fixture they should be allowed to paint it and they should be allowed to keep it on site as well as its maintained"
Mayor Brain offered up the prospect of adding some additional guidance and amendments towards the issue of containers in the M1 zoned areas of the city.
Councillor Cunningham also spoke to the issues of container usage within the city limits, noting how many businesses have not taken proper care of their property that hold containers, while others have made for a proper use of them and take pride in their property display.
"Councillor Niesh has pretty well hit all of the talking points I had. You know that was rezoned improperly to begin with ... One bylaw doesn't fit all, like there are some places up there that are pig stys, you know it's that simple. They have got to be cleaned up there are containers that have just haphazardly been thrown up on an empty lot  and being used and then there's other people up there  that have containers, they have then with a roof above them, they're very neat, they've repainted them, they care about their property and that and I think that we've got to look at that very carefully"
The councillor also noted that the use of containers is here to stay and the city needs to find ways to work with those that are using them.
"I just think that the whole area should not be penalized for the actions of one or two individuals ... the way industry is going now and the storage in this town; we don't have enough storage and we don't have enough industrial land and people have to adapt to it in that M1 area to accept all that and it's something we have to look at as a Council and accommodate as best we can, there are some very successful businesses up there that rely on their containers"
While part of a vigorous discussion, the topic was not fully resolved on Monday and is destined for more conversation sometime in the New Year as the process.
The Monday night review can be examined from the City's Video Archive starting at the 24 minute mark.
Some of the previous reviews of container use in the community can be found below:

A wider overview of past Council discussion themes is available from our Council Discussion archive page.