Last call for alcohol for 2020 comes at 8 PM on Thursday, as new Public Health Order shuts down sales for thirteen hours


A new public health order issued this afternoon by British Columbia's Public Health Officer Doctor Bonnie Henry, will see the suspension of the sale of alcohol in the province tomorrow night at 8PM.

The decisions to act one as Provincial health Authorities and the BC government look to reduce the potential for the spread  of COVID-19  on one of the most popular nights of the year.

The New Years Eve Prohibition Order is directed towards anyone who may have opportunity to sell or purchase liquor on the final night of the year: 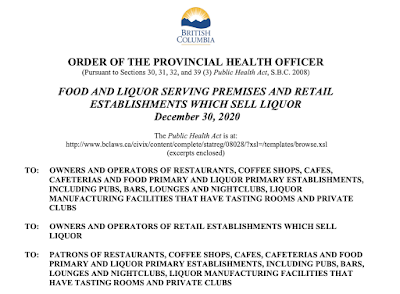 For the establishments which sell liquor the notice in effect specifies the following:

You must not sell liquor between 8:00 pm on December 31, 2020 and 9:00 am on January 1, 2021.
For those of us who consume their products the instructions for New Year's Eve are as follows:
1. You must not be present in premises operating as a nightclub.
2. You must comply with the distancing and other requirements in sections 3, 5, 8 to 12, 22, 28 and 29 of Part B, and with measures, and guidance and directions from owners, operators or staff, designed to avoid the congregation of patrons.
3. You must not purchase liquor from premises to which Part B applies, or from a retail establishment to which Part C applies, between 8:00 pm on December 31, 2020 and 9:00 am on January 1, 2021.
The full list of provisions for the Public Health Order can be reviewed here.
The new public Health order was announced as part of today's public COVID briefing.
While the order is designed to reduce the potential for spread it seems from over enthusiastic New Year's revellers who should not be gathering anyways; it would also seem to set the stage for what could a fairly swift run on local liquor stores tonight and tomorrow until closing time.
That as British Columbians lay in their supplies for the thirteen hours of prohibition.
For more notes on past Public Health Orders see our archive page here.