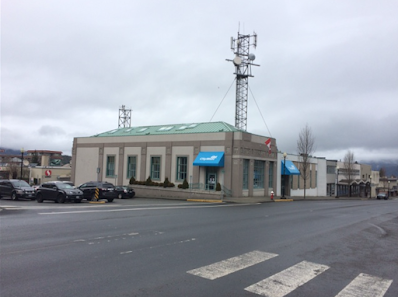 A rather surprising expansion announcement which came earlier this week from CityWest has made for a bit of interest around the city, particularly when it comes to the focus for the future of the City of Prince Rupert owned communication company.

That after CityWest announced the acquisition of a Cable company in Bamfield on the West Coast of Vancouver Island, a location somewhat off the radar it would seem from some of the more recent expansion announcements that came from across the Northwest.

Among those to speak to the purchase, was Prince Rupert Councillor Blair Mirau, who championed the move with "massive kudos" on his Social Media feed as he offered his endorsement of the entrepreneurial drive for the company with the corporate offices just one block east from City Hall. 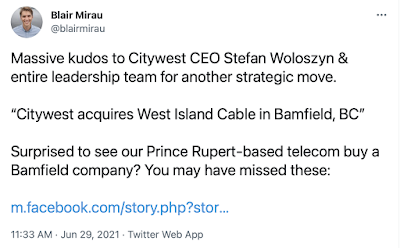 And while one may admire Mr. Mirau's zest for the expansion, he might consider that as a member of City Council that he and the rest of the elected group at City Hall do have some responsibility towards oversight and transparency when it comes to the ownership and operations of the company on behalf of the Community.

The announcement of this week did not make mention of a purchase price or any other elements related to the transaction and much as it was from the purchases and expansions of the past, it might be of some interest for the public to hear if the regional and now long range acquisitions will have any impact on how the company returns on investment to the City.

At one time, long, long ago the City Council chamber was once a forum for updates from the city's departments and institutions; CityWest among them, which provided a glimpse into how the company operates, with officials providing answers to questions from the Council membership.

The last time that City Council hosted a delegation from the city owned communication company was in June of 2013, during the Jack Mussallem Mayoralty.

That event fronted by then CEO Don Holkestad who among his themes provide for a list of 'truths and rumours' related to the city owned company.

Since that period eight years ago, the company has seen two more CEO's take the helm, which includes the current one Stefan Wolosyzn who took on his duties  in July of last year.

Despite being on the job for almost a year now, the CEO it would seem has yet to be invited to make the short walk west to 424 Third West, or in the days of the recent Zoom sessions to pop up on screen, to share a few thoughts.

The days of frequent updates are seemingly from a different era for accountability at City Hall.

For much of the last number of years, whether it's CityWest, Watson Island, Legacy Inc., or updates on such recent ventures as the arrangements related to the Canfisco Warehouse; an information session for the public is not something that this Council membership seem inclined to provide for.

Those areas of interest and many other elements of the current focus for this council could use a lot more in the way of information and transparency from our municipal officials as to how they are managing those assets, services, or initiatives. As well as to the range of expenses incurred or the results achieved.

Instead, for the most part, Council seems to act as though our civic assets operate as some form of a private hedge fund which need not be responsible towards providing a review for its investors.

In the case of CityWest, there probably are many questions that city residents may have for Council to explore.

The pace of the Fibre to the Home project which was a highly acclaimed initiative a few years ago is one that has seemingly slowed to a crawl over the last few years. The lack of momentum leaving a large gap in when it comes to the latest and greatest options for internet users.

Some of the stall has been attributed to COVID, but for residents in the still be hooked up areas of the city, an update as to when it all will be on track again would be welcomed we imagine.

Other areas of note may be to wonder as to why a cable company in an isolated area of Western Vancouver Island was a priority purchase, as opposed to closer options such as Haida Gwaii or the Central Coast.

City residents and investors such as we are, may also like a bit more background on the corporate expansion plan moving forward and how CityWest sees the development of its footprint over the next decade.

Not to mention what kind of return may come to the city which once saw dividends in the millions, but more recently have seen substantially reduced returns in the way of distribution payments.

A good way to start the conversation might be to offer an invite for CityWest officials to drop in at an upcoming Council session and offer up a public briefing on the plans ahead.

If Council members want to be 'in our service' to represent the folks who elected them, they might also want to put out a call for any questions to ask well before any potential session could take place.

You can review some of the past acquisitions and initiatives from CityWest through our archive page here.

A wider overview of past Council themes is available here.