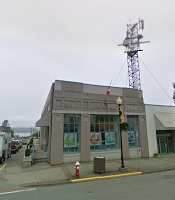 COVID it appears has provided for a bit of a challenge when it comes to the roll out of CityWest's Fibre to Home project, with the City of Prince Rupert owned and operated communication company now advising that they hope to see 60 percent of the city wired up by this fall.

The 10 million dollar project was introduced in 2017,  launched in 2018 and CityWest officials last reported that the project had hoped to reach fifty percent coverage by the end of 2019.

With CityWest having announced a number of out of town fibre projects over the course of the last few months, the North Coast Review contacted Chris Armstrong from CityWest for an update on the local work of much interest to city residents.

In reply, the Director of Sales and Marketing observed that the pace slowed down locally last year owing to COVID, with the company looking to have another sector of the city, focused on the Hays Cove Circle area of the city, done by the fall.

A goal which if achieved would make for 60 percent coverage to that point for the city.

Towards the overall Fibre to Home project Mr. Armstrong observed:

'We’re looking to one day having fibre to the home all over Prince Rupert, and all our customers today can access fast and reliable Internet, TV, and phone services." 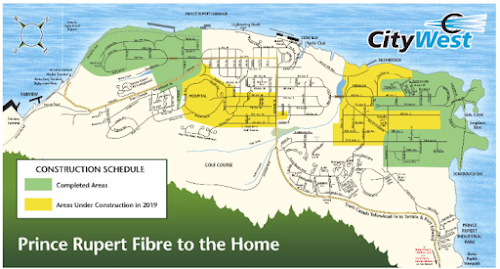 From the map provided at the time of the 2019 update, once the Hays Cove/Fifth East region is complete, the areas that would remain for the Fibre project would include connecting the downtown area, the Crestview/Prince Rupert Boulevard area, as well as the Sloan/Summit/Kootneay  area on the west side of the city.

You can review some of the past notes on the Fibre to Home project from our notes below:

With the residents of Prince Rupert owners of CityWest, City Council may want to return to the days of past and ask for some regular updates from the communication company to keep its investors up to date.

Providing a forum at a public Council session for company officials, even if by Zoom if necessary,  to speak to some of the latest plans for the city owned company.

Sharing further details on the projects ahead for far flung areas of the Northwest and Coastal BC; as well as to the more nearby reaches of the city whether downtown, west-side or east-side.

More notes on CityWest can be reviewed from our archive page here.