Councillor Barry Cunningham highlighted a missing element from Monday's Council session, with notes on what had been an attempt from members of the community to speak as a delegation at this weeks City Council meeting.

Towards the end of Monday's session, the councillor outlined some feedback he had received from members of a delegation who were told that they could not present as part of the evening's Committee of the Whole.

The COW as it's known, is a process of City Council sessions actually designed to solicit some community contribution; though with COVID the process does seem somewhat confusing and not particularly welcoming for would be participants. 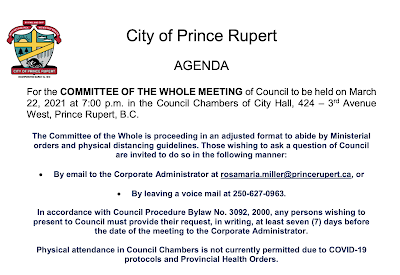 To Mr Cunningham's commentary on the topic,  he observed:

"I was phoned today about a group today that wanted to bring in a petition for the Committee of the Whole and they were told there was already one delegation and I wondered if Rosa, or Dr. Long could enlighten me if we are limited to just one delegation or not, for the Committee of the Whole, on that particular thing. Because it was a fairly important petition and delegation they wanted to speak on a very controversial project"

In reply, the City's Corporate Administrator Rosa Miller outlined how according to the Bylaw in effect, Council can have up to three presentations/delegations per session, depending on the Agenda and what that might look like.

She also noted as part of her overview of the situation that she had spoken with the Mayor and Dr. Long towards the topic.

With an eye on the calendar and the next potential speaking opportunity, Councillor Cunningham, while not sharing any further details as to the nature of the controversial project or the delegation,  asked if the civic administration could perhaps make an allowance to the usual process in place for such contributions.

"Could we possibly instead of a waiting a month for the next Committee of the Whole, have them on the Agenda for the next Regular meeting as a delegation"

Towards that request, the Corporate Administrator noted that she would make note of it and report back to the Councillor.

The current policy on presenting to Council can be explored here.

You can review the exchange from the evening from the City's Video Archive page, starting at the Two hour, thirty eight minute mark.

Earlier in the evening, Councillor Cunningham had noted his disappointment in the participation level of community members when it comes to the city's efforts towards consultation on the city's zoning survey.

Though perhaps his question to the Corporate Administrator on the Committee of the Whole and some of the other recent measures Council and the City have put in place as part of their COVID response could offer some answers. 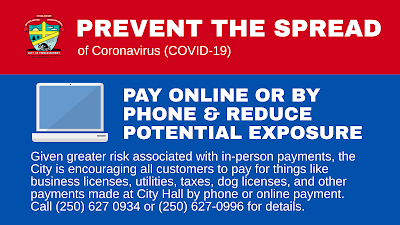 Serving as they seem to do at times, to reduce much opportunity, or even desire for the public to navigate the mixed messaging that the city seems to offer up when it comes to any kind of engagement with the public.

A wider overview of past City Council discussion themes can be found here.