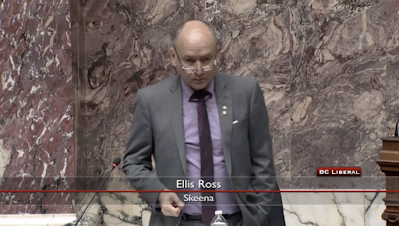 The British Columbia Legislature has introduced discussion on plans for changes to the Court of Appeal Act, currently working its way through government business in this session as Bill 11.

As part of the debate from Wednesday in the Legislature, Skeena MLA Ellis Ross raised a number of themes  for discussion with Attorney General David Eby who is steering the bill through the Legislature, speaking towards how the Appeal Act proposals will move forward.

Much of Mr. Ross's commentary and line of questions on the day was related to how the province plans to engage in consultation with the First Nations of the province as part of their commitments through UNDRIP, a topic that he has spoke of on a number of previous occasions in  past Legislature sessions

As part of his contribution to the debate of Wednesday, Mr. Ross framed some of this viewpoint through his previous service as Chief Councillor for the Haisla Nation.

When we were debating this back in 2017, in estimates and the UNDRIP bill itself, I did get some broad, general answers that didn't actually answer the question that I was asking.
The only answer I really got was from the Attorney General, who at the end of his comments said that the issues would be viewed, under UNDRIP, through the lens of section 35. That was the only comment that I heard through estimates, from all of the different ministers, that made any sense.
And that's what I was looking for, trying to reconcile section 35, with all of its case law — 300 court cases and counting, I guess — and trying to reconcile that with a broad, general statement that came from the United Nations.
And so in terms of the consultation, normally this type of bill would have been adequate to consult the organization you refer to, which is the justice council.
As chief councillor back in my band, if I ever heard about this happening, it wouldn't have occurred to me to stand up and protect my rights and title, especially the consultation and accommodation of it.
But this is all changed with the NDP government's introduction of Bill 41.
And so not really trying to redefine any of these clauses, but I just want to know: how does the government decide — and this is a follow-up to my colleague's question — on which bills to consult First Nations with?
And how do they decide which body they consult and accommodate with, in terms of these types of legislations? 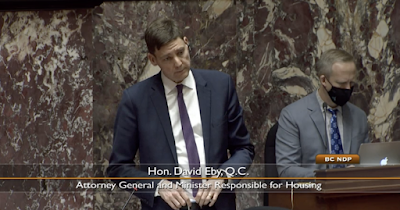