BC's COVID-19 vaccination program crosses over the 520,000 mark, with 9,000 of those results coming from the Prince Rupert Vaccination clinic last week 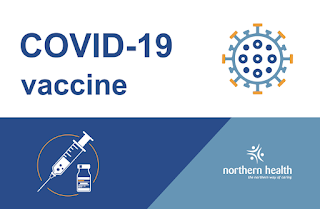 The Provincial government is marking some success with the launch of the COVID-19 vaccination program now underway, making note today that the current pace of vaccinations has seen over 520,000 British Columbians receive their first shot of one of the vaccine options currently available.

This morning Premier John Horgan made use of his social media streams to note that to date, the vaccination program has seen over half a million British Columbians vaccinated with clinics expanding across the province.

During a media information session earlier this week, the Premier noted on the progress that is being found from the vaccination campaign, with his presentation for the British Columbia media the Premier included a special shout out for the Prince Rupert community wide clinic last week.
(that comes at around the four minute mark of the video presentation).

And indeed, Prince Rupert's success has now been hailed as close as City Hall and all the way to the Premiers office and all for good reason.
With the strong community response delivering a blueprint for Health Authorities province wide to use as they move the vaccine roll out on to other communities.

When it comes to total participation, as the CBC's Andrew Kurjata noted this morning on Daybreak North, the eight days of vaccination at the Jim Ciccone Civic Centre saw over 9,000 residents eighteen years of age and over vaccinated.
An achievement which as Councillor Mirau noted on Monday even before the final results were released, means that the community has met the benchmark for herd immunity.
"You know with approximately 9,000 people over the age of eighteen in Prince Rupert, if we're approaching anywhere close to 8,000 as Councillor Cunningham has said, then we're well above what is generally accepted to be  the threshold for herd immunity which is 70% as kind of what experts have agreed is the bare minimum"
Though as all of the Council members cautioned on Monday evening, the dangers of the virus remain among us and following to the current level of measures in place is a must towards putting the last year of COVID related worry behind us.
Northern Health also has offered their thanks for the support found from Prince Rupert during the clinic, with a note as well that anyone who did not get a vaccination can still access one through the Public Health unit in the city.

For updates on the daily COVID-19 briefings from Doctor Henry and Health Minister Adrian Dix see our Tracking page here.
Further notes from Northern Health on health care in the region can be explored here.