BC Bus North receives over 1.6 million dollars in funding for another year of operating costs

The transportation service that transits across Northern British Columbia by bus has been  awarded enough funding to carry on for another year; that following a joint announcement today from the Federal and provincial governments to allocate over 1.6 million dollars towards the BC North bus service.  “Connecting communities and people is essential, especially in a province like British Columbia with such a large and diverse rural and northern population. Extending this service will provide economic growth, as well as safe passage for travellers between Northern B.C.’s remote communities.” -- Terry Beech, MP for Burnaby North-Seymour, and Parliamentary Secretary to the Minister of Fisheries, Oceans and the Canadian Coast Guard and to the Minister of Economic Development and Official Languages
Diversified Transportation, the current operator of BC Bus North, will continue providing service until the contract expires. Services are contingent on the provision of federal funding and are temporary.
BC Bus North launched service in the spring of 2018, picking up much of the destinations once served by Greyhound across northern B.C., called into service when the national bus line ended its service in the province in February of that year.
As part of their service, BC Bus North has a fleet of four highway coaches that provide scheduled service to 39 communities including Prince Rupert.
Diversified is part of the Pacific Western Group of companies, which is also the operator of regional transit services in the Prince Rupert/Port Edward area.
North Coast MLA Jennifer Rice, who has long been an advocate for regular and reliable transportation across the Northern Corridor region, noted how the service is vital for residents for a large number of communities.
“For people in northern B.C., the service that BC Bus North provides is vital to their weekly routines and well-being. Indigenous communities and British Columbians living in these rural areas rely on this reliable, affordable transportation service, and we’re thrilled that BC Bus North will continue to serve people from Prince George, to Prince Rupert, Fort Nelson, Valemount and all locations in between.”
More on today's announcement can be reviewed here. 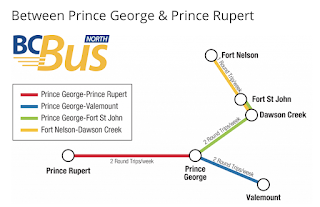 The BC North bus arrives and departs from the Highliner Inn in Prince Rupert, you can learn more about the service here.
For more notes on Transportation along the Highway 16 corridor see our archive page here.