So far, the only real change in the nature of the city's transit system is where the buses park at the end of the day, as Pacific Western Transportation takes over the delivery of transit services in Prince Rupert and Port Edward.

The city's Yellowhead Industrial site is the new home for the transit fleet, with the Pacific Western Offices set up in the old Yellowhead Auto Repair building on Saskatoon Avenue.

While the renovation work continues on the new offices and garage facility, a temporary bus corral has been set up at the site of the old Bowling alley. 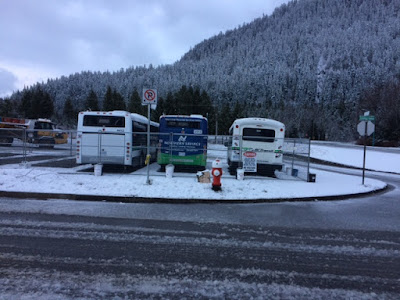 BC Transit made note of the official changeover on their website over the weekend, posting the key information required for passengers to access route and service information. 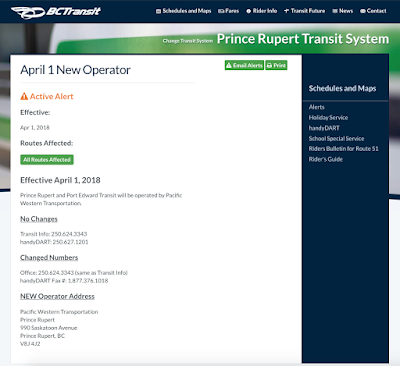 Pacific Western Transportation secured the services after a competitive bid process was announced by BC Transit last year. The Alberta company will inherit much of the fleet that was run by First Canada over the last few years, including some new vehicles recently introduced into service.

As they began to move into their operations phase and assemble their staff, Pacific Western reviewed resumes of those who worked for First Canada, as well as to post a range of career opportunities through their twitter feed.

Pacific Western is also taking over the Transit service in a number of other Northwest BC communities, adding to the growing list of British Columbia towns and cities where they provide transit.

Email ThisBlogThis!Share to TwitterShare to FacebookShare to Pinterest
Labels: Pacific Western takes over transit in NW BC