Prince Rupert City Council received a tutorial on Urban Farming Monday night as representatives from Ecotrust Canada delivered a presentation on their plans for a project that would rejuvenate a parcel of land in the heart of the downtown area.

Charles Gerein and Alexie Stephens provided for the overview of the project to be known as the Kaien Island Demonstration Farm, a  setup that would include a greenhouse, planters and other elements included for the location at 225/227 Second Avenue West, which once housed the old Farwest Bus Lines yard.

The project will also be a partnership of sorts with the Metlakatla First Nation providing the use of their land in the downtown core along with some of their knowledge to the program, which will include a network of workshops for local residents to participate in.

"Food security exists when all people, at all times have physical and economic access to sufficient, safe and nutritious food that meets the dietary needs and food preferences for an active and healthy lifestyle and given our context here in Prince Rupert with Indigenous Nations within our community this food security definition also needs to include cultural and traditional foods as well " -- Alexie Stephens from Ecotrust providing the thumbnail sketch of the focus towards Food Security that the Urban Farm will provide.

During the course of his overview, Mr. Gerein provided for an overview of what the Farm will look like while also outlining their plans towards composting and how they will share that process with the community in hopes that they will take up the practice and share with the community. 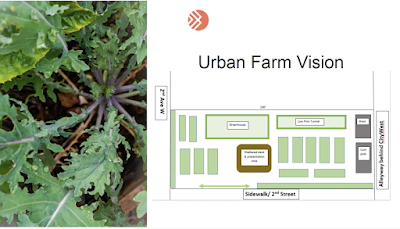 "We are in the beginning stages of the construction on our urban farm in downtown Prince Rupert this will be on Second Avenue. Our lot is approximately 100 feet by 35 feet, it will be secured with a fence and then we are going to build several structures on there such as a Greenhouse, waist beds, low poly tunnel and a sheltered deck for a presentation area  as well as a common area for people to gather and converse about growing food" -- Charles Gerein from Ecotrust with a snapshot of what the Urban Farm will look like
As they move forward the first year harvest from the urban farm will be distributed through a number of partner organizations that serve residents in need in Prince Rupert. Once the infrastructure has been established they also hope to develop a wider food distribution list to share the harvest with points inland and then bringing food from neighbouring communities to Prince Rupert.

Following the presentation, many of the councillors expressed their support for the project, with Councillor Cunningham launching the discussion picking up on their themes of composting and where they plan to set that element up to receive organic waste from members of the community, something which they advised was still to be determined.
The Councillor also asked about the timeline for the project and who would be involved.  On the first question they noted how it would be hopefully a five year project or more, with funding in place for the early stages and plans to continue to seek out funding to allow it to continue in the future.
When it comes to launching the project, Mr. Gerien will be the lead in the effort, assisted by Ken Shaw and the hope is to  bring area students and more community members into the fold as the program begins to get underway.
"Right now you've got a couple maybe two possibly three community gardens around town are you going to be networking with them at all, or just going to be on your own"? -- Councillor Barry Cunningham
Councillor Cunningham also called attention to the other community gardens around town and if there were plans to bring them in as part of the project; towards that the Ecotrust official observed that they have hopes of networking with those other interests such as the McKay garden group and the Prince Rupert Garden Club.
Councillor Skelton Morven had praise for the project as well and shared some thoughts on how the effort may work towards alleviating food security issues in the community, while Councillor Randhawa also expressed his hopes for much success for it.
Councillor Adey also expressed his enthusiasm for the initiative,  asking towards whether the growth of food would be seasonal and what kinds of foods they foresee as more suitable to our climate.
While observing that it will be seasonal,  they noted that part of their mission is to show what can be done in your own space and how they hope to show that you can extend the growing season through the use of greenhouses and their growing tunnel planning.
The Ecotrust group also outlined how they hope to be quite diverse in the variety of produce that is harvested through the garden.
"Obviously it's a very exciting project and you know wearing my other hat for a moment, obviously we've been part of Ecotrust in the past with the Nisga'a Society so Im so thrilled to see this partnership with Metlakatla. So not only thanks to you guys for taking this on, but thanks to Metlakatla for giving permission to allow this temporary use on their property, I think it's a really creative repurposing of a vacant lot in the downtown core so that's excellent"   -- Councillor Blair Mirau
Councillor Mirau also noted how food security is a major issue for the community, citing the findings of the Gitmaxmak'ay Nisga'a Society on the situation and how the Ecotrust partnership with Metlakatla will provide benefits to the community.
You can review the full presentation from the evening from the City's Video Archive, starting at the beginning of the Monday night session.
For more note on the Monday Council session see our Council Timeline feature here, as well as our Council Discussion Archive.
Some background on the path ahead towards the Urban Farm for Prince Rupert can be found from our notes from Monday which features links to some of our past stories on the topic.
Posted by . at 9:21 AM