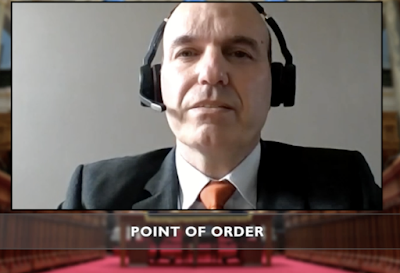 An interesting exchange in the Legislature on Thursday highlights some of the challenges of remote participation these days, the current model of participation one which it seems can play tricks on the ears of some of the members as they follow the fast pace of debate at the British Columbia Legislature.

As part of what is becoming a predictable split on partisan lines when it comes to debate of Bill 10, the legislation of financial supply which has made for a key conversation topic for the Opposition Liberals, the parsing of words is such that every comment made gets some significant attention.

Stikine MLA Nathan Cullen rose on a point of order (or communicated his concern remotely as it was) over something he believed had been said as part of the discussion of the day, calling attention to how he viewed the commentary from MLA John Rustad from neighbouring Nechako.

"I do listen with great interest to my friend from Nechako Lakes. I know his constituency well. Beautiful part of the world with some incredible people, with an enormous amount of dignity. I think he started his speech Mr. Speaker, and I'm new to this place, so … Perhaps you can guide me. It's that he referred to comments made by other members as "manure," I believe, and spreading manure about the discussion and debate.

And again, I'm new to this chamber. But in other parliaments, that type of language and reference to other members is certainly deemed unparliamentary at the very least, if not outright offensive, and not representative of the people we hope to represent.

I'm wondering if the member would consider retracting his comments and replacing them with something a little bit more appropriate for this chamber and the people he represents. 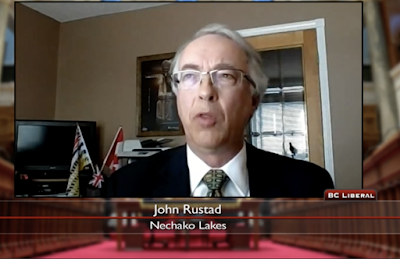 In reply, the Nechako Lakes MLA made note for the record that he did not use the term as referenced by Mr. Cullen, and as the transcript will show ... no manure was spread during the course of the presentation, a little fertilizer perhaps, but no manure.

It's interesting. You know, looking outside — I'm speaking today from my home at Cluculz Lake in my riding — the weather has been nice. There has been a little bit of the lake that has opened up in front of our place, because it's shallow.

And the first of the Canadian geese have arrived, which is always a pleasure for my wife and I to see. And they've come up on our lawn, and we've got a little bit of grass showing because we've got some southern exposure.

They're nibbling on the grasses and doing what geese do: fertilizing the grass, which is not always quite so welcome, but it happens.

And I have to admit that it made me wonder. It made me think, when I'm listening to some of these speeches here today, just how much fertilizer is really being spread around.

Because some of this stuff is pretty crazy that is being said, but I'll get to that in a bit.

To bring the matter to a close before the MLA's headed off for their weekend break, House Speaker for the afternoon Norm Letnick ruled in favour of the member from Nechako

Members, a point of order was raised during the speech by the member for Nechako Lakes by the of Honourable Minister of State for Lands and Natural Resource Operations, that the member from Nechako Lakes had used unparliamentary language.

The word that I heard was "fertilizer," which in my judgement is not unparliamentary.

You can judge for yourself on how best to interpret the spirit of the discussion and the differences between fertilizer and manure from the video archive from the legislature starting at the 3:40 PM mark of the proceedings.

More notes on the work of Mr. Cullen in the Legislature can be reviewed here.