Zoning Bylaw Survey participation and results brings some surprise, some disappointment and some appreciation from Council members 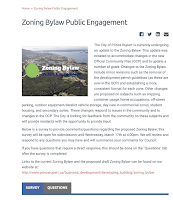 Prince Rupert City Council received the results of an online consultation program which they launched through the Rupert Talks portal earlier this year,.
With the city's contract planners from iPlan delivering an overview Monday evening as to some of the key findings from the public participation process.
We first made note of the project on February 25th and over the course of almost a month, residents were offered the opportunity to explore and comment towards some of the proposals towards new bylaws, with the consolation period coming to an end at mid March.
The survey consisted of a panel of twelve questions on a range of themes.
Summary of Storyboards, Home occupations, Parking Standards& Secondary Suites,  Outdoor Equipment and Vehicle Storage,  Short Term Rental Accommodations,  Shipping Containers,  Student Housing,  New Marina District Zone,  Expanding Industrial Areas near Ridley Island & the Highway,  Focus Commercial Uses in the City Centre, Miscellaneous Additions
The Report from Chris Buchan from iPlan was included as part of the Monday Agenda package, with the introduction and a few observations from the report provided below: 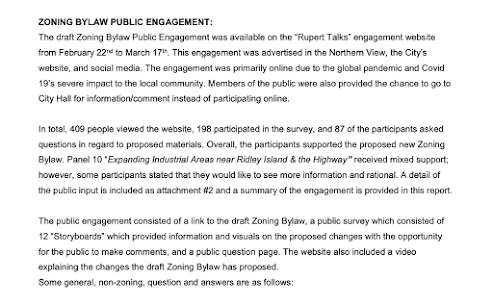 As part of his presentation to Council, Mr. Buchan offered a wider overview of some of the findings for Council at the evening session and answered questions from the Council membership.
From the observations Councillor Cunningham viewed the participation level with a bit of disappointment
"I'm really disappointed in the lack of  participation when you look at the numbers in the different categories and that and you know when you see that only 195 people actually participated in this survey it's kind of disappointing because it's really affecting the town in different ways . And for very few people to participate in this ... I don't know how much more the city can do to communicate this to the residents  but it's just somewhat disappointing that so few people participated in it"
While for his part, Councillor Adey found some positives from the level of engagement with the public that the opportunity provided.
"By the same token if you put 195 people in a room and called it a public meeting you would say it was a pretty good meeting"
Councillor Adey also had some thoughts on a few of the elements, one of them speaking to the area of home occupations and how it may relate to the recent approval of the Urban agriculture temporary use permit approved earlier in the evening.
"It does seem to me that, as we move forward, if we determine from the project that occurs on Second Avenue that this is a thing that we're going to expand upon in the community; we do need I think to develop a more detailed and nuanced bylaw language around what urban agriculture is what it isn't. What's unique here compared to what a bylaw like that might look like in another city, in another climate. So I would like to  see us kind of bridge the gap between the temporary use  permit project and our bylaws and the language that we start to develop around the concept of urban agriculture.
Mr. Adey also took note of the findings on parking from the survey and asked how an active transportation plan may fit into the process of change that the council is going through.
In response Rob Buchan outlined that the active transportation plan and others have been taken on in early fashion to address pressing needs, but how the Active Transportation would be considered an important next step or soon to come next step.
Councillor Cunningham followed up with an observation on the areas of parking and alternate transportation, noting that he didn't know that increasing alternate transportation would help downtown parking or not.
"People in Prince Rupert it's a small town, alternate transportation would just be walking compared to driving downtown ... when you walk down Third Avenue at eight o'clock in the morning and see the number of cars already parked there as people are starting work and things like that, alternate transportation might help but at the same time increased parking would help too  "
Councillor Blair Mirau also spoke to the level of response and found optimism in the level of participation, noting of past engagements from previous council initiatives.
"Just going back a subject or two, I want to agree again with Councillor Adey, I was actually a little bit heartened to see the feedback, just keeping in mind you know we've got hundreds of responses for Vision 2030, hundreds of responses for the Official Community Plan and now almost  200 on the Zoning Bylaw.
And from my perspective those things get less and less interesting, or less and less more public consumption.
Where Vision 2030 is something that I think  engages the whole community and gives us permission to think  really big and long term. Official Community Plan  you might be thinking ten years in the future some concrete plans and  zoning bylaw is you know a little bit more minutia of detail.  So I think that it's expected that we're seeing slightly less engagement.
But on the whole what I'd say is less than the number of responses is I'm actually more heartened to see the level of broad based support for the majority of changes that we're proposing here. And that's consistent with what we've seen with the very high levels of support for Vision 2030 and how to incorporate those planning principles and ideas into the Official Community Plan.
So as far as I'm concerned you now that's heartening to me to see the direction we're going"
You can review the full discussion on the Survey from the City's Video Archive starting at the one hour twenty four minute mark.
You can review the full document from the City's Agenda Package starting at page 20.
Further notes on Monday's Council session can be explored from our Council Timeline Feature.
Further background on the city's planning themes can be reviewed here, while our archive of past Council Discussion topics can be found here.
Posted by . at 4:48 PM