See update at bottom of page
Travellers with BC Ferries will be finding some frustration today as the Ferry Service announces the cancellation of today's sailing from Prince Rupert for Haida Gwaii, as well as the cancellation of the Friday schedule to the Central Coast and beyond, including the regular connection with the   Northern Sea Wolf which serves the Central Coast region.

In a Service Update issued today, BC Ferries notes apologizes to its customers for the situation and notes that the sailings were cancelled owing to a staffing issue, though no details were provided as to the nature of that situation. 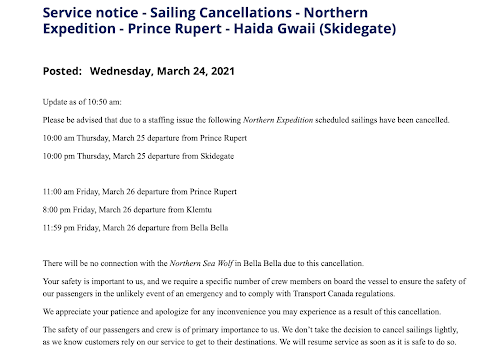 Normally cancellations on the North Coast runs out of Prince Rupert are related to weather issues, with staffing concerns not frequently affecting the service out of the Fairview Bay Terminal.

You can access updates on the BC Ferries schedule in and out of Prince Rupert from their website's Service Notices feature.

Update: BC Ferries added some details to the staffing situation that has resulted in the cancellation of the two sailings out of Prince Rupert, noting that the situation is related to a COVID-19 crew exposure on board the vessel which serves BC Ferries Northern routes.

The Ferry Corporation further noted that with contact tracing complete it has been determined that there is no risk to the public.

The ship has now set sail for the Fleet maintenance facility in Richmond for refit and cleaning, with the Northern Adventure making its way to the north coast following its own refit, with service set to start on March 27th from Port Hardy.

For more notes related to Marine Transportation on the North Coast and Haida Gwaii see our archive page here.