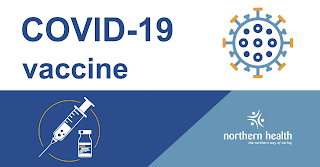 The success of the community wide COVID-19 vaccination program in Port Edward and Prince Rupert this week had been such that Northern Health has updated its vaccination plan moving forward this weekend and beyond.

In an advisory posted to the Northern Health Prince Rupert Facebook page, the Heath Authority notes that the demand for appointments has decreased as the week has moved forward and that  Starting Sunday, the clinic will be operating on a reduced hour schedule of 9 AM to 5PM. 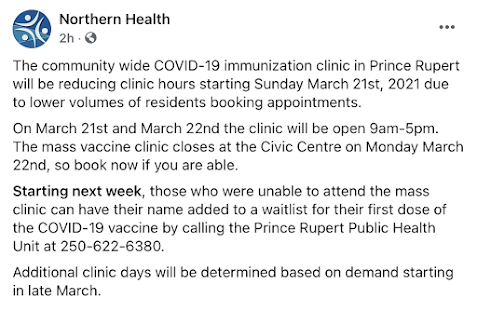 The rollout of the program which only began last Sunday has been relatively problem free thanks to some impressive planning by the Health Authority and assisted by a range of partners and community volunteers.
Those efforts have allowed for a large volume of those who have booked an appointment to have received their first of two COVID-19 vaccine shots in just this one week, something that may even have surpassed the expectations of the organizers who originally had indicated a month long project would be required.

It was estimated at the start of the program that 1300 vaccine shots would be delivered each day, so far Northern Health has not released an update on how many residents of the region have passed through the line at the Auditorium this week.
And While the Civic Centre program will end at 6PM on Monday, those who may have missed the clinic this last week can have their name put on a wait list, with Northern Health to assess future clinic days later this month.
If you still need to book an appointment after Monday, contact the Prince Rupert Public Health unit at 250-622-6380
You can keep up to date on the clinic through the Northern Health Facebook page.
For more notes on Northern Health see our archive page here.