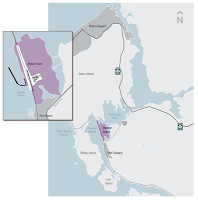 As we noted yesterday, the Pembina LPG Terminal has wrapped up its major construction schedule and is now nearing its operational stage and as they head towards their first shipment to global markets they still have a bit of internal work ahead.

Towards the terminal opening,  Pembina will apparently be testing out a few things at the Watson Island site and as good neighbours they have let those living nearby of that process.

In a letter relayed by the District of Port Edward, Pembina offers up a timeline of testing for the next seven to ten days.

As part of the update Pembina officials advise that residents of the immediate area may hear a number worms, air releases and other unusual sounds which all make fo part of their ongoing commissioning process. 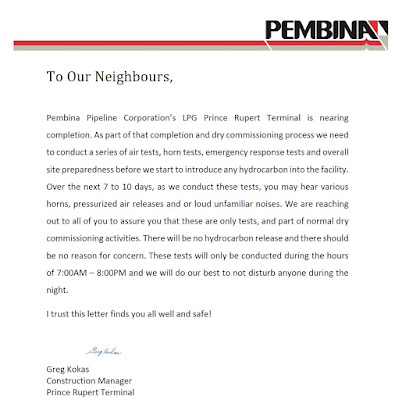 The commissioning work is an essential part of the launch of the terminal   which will soon be receiving gas from point east by way of the CN rail line across Northern and Northwest BC.

This last stage of tests signals the end of the three year project that has reclaimed a portion of Watson Island for use as a marine export facility for the Alberta based energy company.

For more notes on the Pembina terminal see our archive page here.