The last six years or so of official duties  as Mayor of the City of Prince Rupert have been but the training run for the real job ahead for Mayor Lee Brain.

That, as he and spouse Hailey welcome the newest resident to the community, with the Mayor announcing the birth of a daughter, Olivia Eleni earlier this week.

Mr. Brain, sounding very much like the proud father as he should, shared word of the happy family event through a Facebook page update on Friday afternoon.

The post to his social media account highlighting the joy that the birth of a child can bring, delivering word that mama is doing well and sharing the thanks of the new parents to the many health care workers that crossed their paths on the journey. 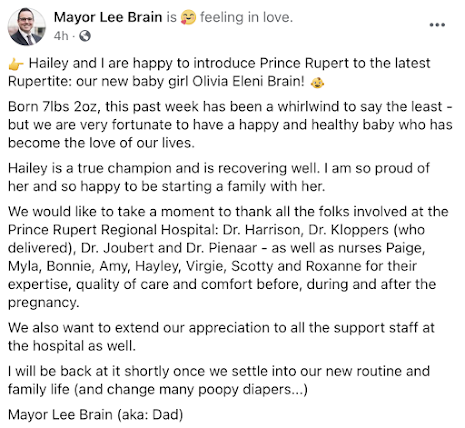 The young miss (the photo below was included as part of today's announcement) is the first child for the couple and her arrival will mark a new and life changing chapter for the local politician who has served as the city's Mayor since 2014.
As he notes in his update, he will be adjusting to a new routine and some new duties outside of the scope of civic office; a few of which clearly haven't been part of the job description while navigating the duties of Mayor and keeping his council membership on track.
As we learned earlier this week, Mr. Brain intends to take a bit of time off to spend with his family and their new arrival and to prepare for the wild but thrilling life and a wee bit of lost sleep ahead that parenthood can bring.
We join many in the community today in wishing he and his family all the best as they explore a whole new world ahead.
You  can review the birth announcement here and offer on your congratulations from the social media platform.
More community notes can be found from our archive page here.