At Monday evening's City Council Session, Richard Pucci, the City's Operations Manager outlined some background towards a request for Council to approve the city's plan to explore grant funding opportunities towards an innovative wastewater treatment concept.

One which if it moves forward, would be be used as part of the treatment process of the city's waste water as part of the wide ranging water infrastructure program

As part of his presentation, the Operations Manager also observed how in addition to the Federation of Canadian Municipalities Green Municipal Fund grant program, the city was looking at other options for funding for the 3 million dollar price point for the pilot project.

"The City is researching the ability to treat our community's liquid waste through an organically based wetland system. The capital cost of this pilot project is between 2 and 3 million dollars, this grant would contribute up to 500,000 dollars towards that capital cost. The city would be responsible for the remainder, however this department and myself are actively looking for other grants and other sources, opportunities to fund the remaining portion  ... Based with the need to develop liquid waste treatment for the community the city will significantly benefit from this grant to explore green and innovative options" -- City Operations Manager Richard Pucci speaking to Council Monday evening
In follow up comments to the presentation, Councillor Nick Adey inquired about the city's 2.5 million dollar share of the cost of the proposed pilot project, asking what the city's position would be if unsuccessful in finding other grants and supports and if it's a cost efficient use of city money
Mr Pucci noted that the city has a surplus in the sewer fund at the moment and how other levels of government are interested in helping fund the program.  He observed how this organic based wetland solution offered a significant saving from the more traditional style for wastewater treatment and is a favourable option for the community, as well as being innovative, green and sustainable.
"As Council is aware, you know the numbers are quite staggering for sewer treatment for our community through classic treatment which is large concrete vessels strictly for containment ... this system looks at organically based wetland which we do have a lot of that in our community, through activated treatment. So we believe that this is a favourable option that could save a significant amount of money for the community and be innovative, green and sustainable" -- City Operations Manager Richard Pucci
For his part Mr. Adey offered his endorsement for  the concept and offered his hopes for success of it.
"I'm very much in favour of this, I think it's a very forward thinking, very green, very progressive thing  for us to be going after and I really hope it works out" -- Councillor Nick Adey
He was followed by a number of other Council members who also expressed enthusiasm for the proposed solution to the city's ongoing themes on waste.
Councillor Cunningham noting how the proposal was cutting edge, asked if any other community had adopted the solution the city was looking at.
In reply Mr. Pucci noted that a number of northern and remote Canadian communities use similar methods for their waste situation and that it is considered an accepted practice in those areas.
He added that the city is hoping to adapt the concept to coastal climates and conditions, he further noted how the  ground conditions and naturally wet climate of the Prince Rupert area are favourable towards such an application.
Councillor Skelton Morven also hailed the forward thinking nature of the project, as well as the research of Mr. Pucci and noted some of the genesis for it came from a trip he and Dr. Robert Long took to an FCM convention when discussions began and how it will utilize the natural muskeg in Prince Rupert.
Councillor Mirau also noted how this grant application will be one which could save the community a potential of tens of millions of dollars and turns one of the city's largest liabilities into an asset.
Going further he compared the wastewater proposal to how the city addressed issues at Watson Island, the Councillor observed of the ambitious scope of the proposal and how Prince Rupert could be a model for other communities.
"It's a grant proposal that will save us in the factor of potentially tens of millions of dollars on a very innovative solution to a very complex problem. It's environmentally restorative, it turns one of our biggest liabilities into an asset, which I think you know based on our experience in Watson Island it is possible. Even though its ambitious and optimistic and you know, even sometimes when other people haven't done it before I think if we're going to be a model for others and take a little bit of a risk here, this is the way to do it in a way that's very considerate of our local eco system and  solves what could be one of the most expensive mandated projects that we have to accomplish here, on a time frame from the Federal Government -- Councillor Blair Mirau
A copy of Mr. Pucci's report to Council was posted to the City's Agenda Page, which you can review below: 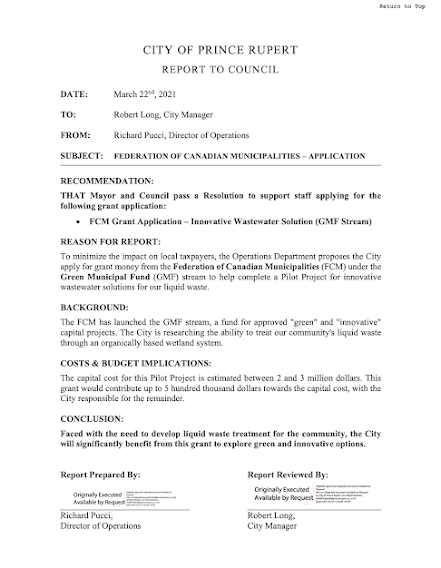 Judging by the comments provided on the night, the Council members seem to be in the know on some of the larger details to Mr. Pucci's plan, of which many were not shared as part of the Monday presentation, which still leaves the community residents somewhat lost out in the muskeg when it comes to the scope of  the project that the City may have in mind.
Back during the the Hays 2.0 vision blueprint of the Spring of 2018,  the need for a wastewater solution was flagged by Mayor Lee Brain as one of the key requirements for the city's infrastructure programs, with the estimated cost towards wastewater estimated at 175 million dollars at a minimum.
So if we're talking in the range of tens of millions in dollars of savings from the notes from Council as outlined on Monday night, that would be something quite welcome from residents, and with such a positive note to deliver, perhaps Council should share their enthusiasm for Mr. Pucci's proposal with the public one more time.
Asking him to return to Council soon, that for an expanded speaking opportunity to explain how the green organic process differs from the more traditional process of wastewater treatment, how it will work in the Prince Rupert setting,  as well as an indication as to where they plan for it to be located it in the community.
Some background on those communities that currently use such systems might also be of help to get clearer view of the Big Picture that the City seems to have in mind, and may allow residents to do their own research on the plan that seems to have much momentum for Council.
And finally of course, a thumbnail guide to the cost of it all from feasibility study, to current plans for this pilot project and on towards whatever may come next as we look for the the solution for the waste water issues.
You can review the full presentation from Monday from Mr. Pucci from the City's Video Archive starting at the 2 hour 25 minute mark.
More notes on Monday's Council session can be explored from our Council Timeline, while a wider overview of past Council discussion themes is available from our Council Discussion archive page.
When it comes to much of the city's infrastructure issues, our archive page here, provides a glimpse at some of the themes and past notes.
Posted by . at 2:50 PM