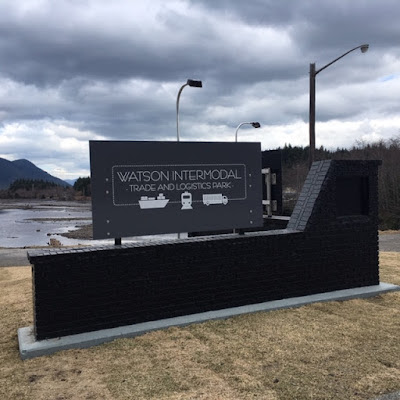 That as Prince Rupert City Council celebrated the successful showing for the Watson Island Industrial site at an Environmental Awards ceremony held mid month in Toronto.

By way of an introduction to that success, we made note of the city's successful night it Toronto at the 2022 Browne's earlier this month.

Monday night, Mayor Pond led off the commentary and civic congratulations towards the city's success as part of the Regular Council session.

"Some members of our Senior Management Team were invited back east to be at the, what are known as the Brownie Awards for Brownfield development and we were a finalist in one category.

And believed that's why we were going and did not get the award, and well OK it's still nice to be nominated and at the end of the ceremony were awarded the Big Award.

This is for the Best Large Project, it's for the Watson Island Redevelopment and it's specifically noting the creative approach and partnership that was created here by our local team.

That took an incremental approach that basically says we have this gigantic site it's got a whole lot of issues on it, we're going to go phase, by phase, by phase and each proponent in those phases will be responsible for the cleanup, so we're proud.

And not only that, but this is the second significant award that our people have captured this year, in that we also received recognition for the OCP, so Good things happening here"

City Manager Dr. Rob Buchan also provided for some tributes of his own on the occasion of the review of the Award, making note of the involvement of a number of industrial stakeholders, as well as a trio of City staffers.

Mr. Buchan observing of the work of Dr. Robert Long, his predecessor in the City Manager's office; along with Director of Operations Richard Pucci and Director of Business Services Paul Venditelli.

Along with the senior civic staffers, he also made note of the members of the City Council  at the time, noting of the work of all involved as the architects of the Watson Island plan which led to the award this fall.

"Really what I wanted to emphasize was that this was a team effort and an effort that the City should be very proud of. It was supported by McElhanney Engineering and Trillium environmental, as well as by the Mayor and Council of the City of Prince Rupert.

It was a bold step, a bold move that the City undertook.

And while there were many people involved in bringing this all to reality and those people all share in this award. I would like to particularly note that the city's success in this bold and innovative redevelopment of Watson Island was especially due to the hard work of a few particular staff.

And I would like to mention that his would be the former City Manger, Dr. Bob Long, our current Director of Operations and Intergovernmental Relations, Mr. Richard Pucci and our Director of Business services, Mr. Paul Venditelli

Mayor Pond wrapped up the tribute to the award winning project with a few final thoughts towards the work of the previous council; along with his predecessor Mayor Lee Brain and that of former Councillor Blair Mirau.

"In the spirit of that, Councillor Forster and I, can really claim no credit.

We get to be here, and so I want to acknowledge the existing members of the previous Council,  as well as the two gentlemen who are not in the room.

And so Councillor Forster, you and I can go job well done"

The acclaim for the City's Watson Island project can be reviewed through the City's Video Archive starting at the thirty eight minute mark of Monday's session.

And while  the success at the Awards ceremony and recognition for the project that it brings  is well deserved; it's worth a reminder, that the judges of the Awards panel probably know much more about what was involved in the Watson Island initiative than the residents of Prince Rupert do.

The work on Watson Island for the most part moved forward with few updates of substance for the community during the lengthy remediation process, or towards its rebirth as a Logistics Park and home for the Pembina LPG terminal facility.

The most recent review from former Mayor Lee Brain came as part of his State of the City presentation in late June,  one which was light on any financial details that may offer a glimpse into how much has been spent on the site, or to detail how much has been recouped from any current ventures in place at the reborn logistics park.

From the Watson Island/Legacy notes of that June evening, one of the more memorable moments was when Mr. Brain observed as to how Council has approached the use of Legacy Corporation in recent years.

And how it may have raised some attention for the public, with the former two term Mayor  noting as part of his presentation: 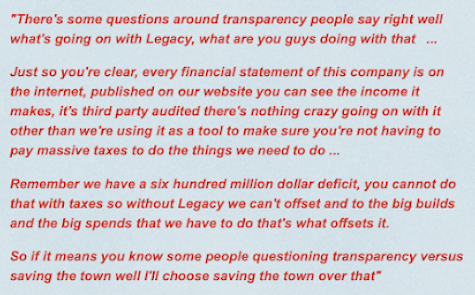 With an award in hand, some at City Hall might have cause to suggest that the ends justified the means in this case, despite the lack of full engagement with city residents on the work at the time.

Still there is the opportunity, whenever they wish for this new Council, one which features many of the principle participants of the last one, to provide an update on how the Watson Island program came together to deliver the award win.

One item which might be a place to start is the recent announcement towards developing the Watson Island site for Hydrogen export shipments.

A proposal delivered in the final days of Mr. Brain's time in office and one which has yet to be mentioned publicly in the Council chambers of the new collective.

The new Council now has a new opportunity, if they choose,  to be more inclined towards more extensive and complete information sharing as they move forward on such large initiatives.

Both on previous work at Watson Island and towards some of the future plans ahead.

As the Monday night Council session moved forward, there was a recurring theme for the evening for a few of the councillors that framed many of their discussions.

That being a desire to keep the public informed on large issues and engaged in the process and what the City Council has planned towards them.

Hopefully that becomes a Council policy initiative, rather than just a talking point as the Council elected on October 15th finds its feet in the new year.

More notes on Monday's Council session can be explored through our Council Timeline Feature.

A review of Watson Island themes of the past is available from our archive page.