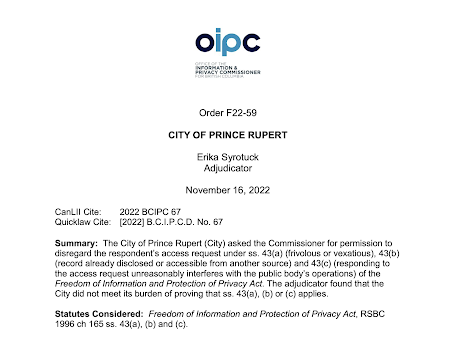 City staff members will seemingly be digging deep into the records both electronic and on paper at City Hall. That following a recent decision by the Provincial Agency which oversees Freedom of Information requests.

The City of Prince Rupert has been denied a request to Disregard a request for Access to Information, with an Adjudicator with the Office of Information and Privacy Commissioner ruling that the city did not meet the burden of its request.

The Decision from Adjudicator Erika Syrotuck was provided November 16th, following the City's request to disregard a respondents access request, the city citing a number of sections of the Freedom and Protection of Privacy Act.

The request came from an applicant who is a part of a union and had requested all correspondences between January 1 2004 to June 13 2022. between the City and the Construction Maintenance and Allied Workers.

The City's focus for its request to disregard the request included:

In the decision, the adjudicator found that City did not meet its buden of proving for those elements.

The request appears to be related to past collective bargaining issues between the union in question and the City; with the scope of the FOI request dating back to the days of City Manager Gord Howie and moving forward to this summer. 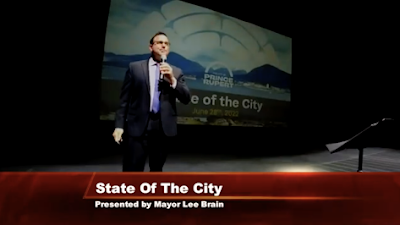 Sections 21-26 of the Decision however also make note of a period of time related to the June State of the City Presentation at the Lester Centre of the Arts.

Of note from the Decision, some apparently contentious moments at that event between then Mayor Lee Brain and members of the Union, as part of the Question and Answer portion of that evening's presentation.

The theme as the documentation from the report suggests was related to the city's water infrastructure plans and water quality concerns at the time.

That Q and A element of the Mayor's presentation in June was not live streamed to the public.

The notes from the Office of Information and Privacy also observe as to how that exchange carried on into the parking lot at the Lester Centre. 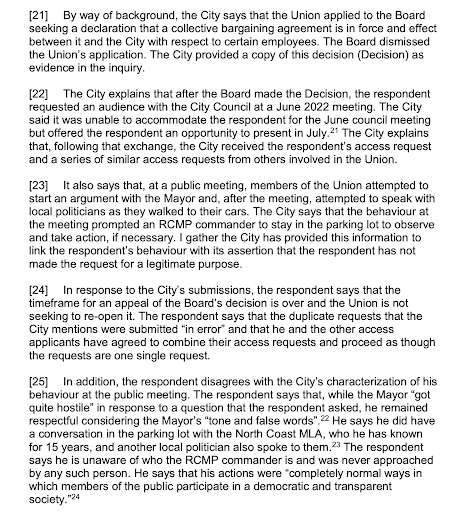 The full report which you can review here, offers a glimpse into how the City's request was viewed by Adjudicator Skyrotuck, with the Response to the city's list of requests from the sections it had cited noted below:

For these reasons, I am not persuaded by the City’s submissions that the request at issue is either frivolous or vexatious under s. 43(a) of FIPPA.

In summary, I find the City has not met its burden with regards to s. 43(b).

In light of such scant submissions, I am not persuaded the City has met its burden of showing that responding to the access request would unreasonably interfere with its operations. I can appreciate that the 18-year timespan of the access request is a long timeframe, but that alone does not persuade me to find in favour of the City.

The City has not provided any estimate of how long it thinks it would need to search for the records or any other information that is capable of supporting its assertion that responding to the access request would unreasonably interfere with its operations.

The Conclusion to the report noted that for those reasons, the adjudicator had denied the City's request to disregard the respondents request under section 43 of FIPPA.

As noted in the passage above from the decision, the OIPC document frequently referenced a British Columbia Labour Relations Board decision issued on May 11th of this year between the City of Prince Rupert and the CMAW and BC Regional Council of Carpenters.

That ruling which you can review here, makes for even more fascinating reading and a glimpse into the state of some of the ongoing labour issues for the city.

It also would seem to serve to open the door just s bit towards some of those issues we imagine that have made for the many past closed doors meeting hosts by City Council.

So far, the City has not made mention of the decision by the Information and Privacy Commissioner, nor the scope of the issues related to, and raised by the union through any of its public information sharing options.

This marks the second loss in just over a year for the City when it comes to its efforts to refuse an FOI request.

As we noted in the fall of 2021, the city of Prince Rupert was denied a request to provide for body camera footage related to a bylaw complaint.

More notes on past City Council themes can be explored through our archive page here.