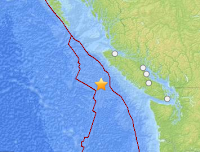 British Columbia has been struck by another rumble from the seismic plates off the coast, this time a 6.3  magnitude earthquake off the coast of Vancouver Island running directly between two fault lines that run along the west coast of the Island.

The earthquake which struck at 6:02 Pacific time, was situated 116 kilometres South, southwest of Part Hardy, 271 kilometres West of Port Alberni.

There were no reports of damage from the earthquake and so far, outside of the Tofino and Ucluelet areas, few people have reported having felt the temblor.

No Tsunami warning was generated from this latest earthquake.

The Vancouver Island rattle follows a more serious 7.4 magnitude earthquake earlier today off the coast of Guatemala , which claimed the lives of at least 39 people.

Haida Gwaii also felt a few more aftershocks from the 7.7 earthquake of October 27, today's aftershocks rumbling at the 4.1 magnitude range, the most recent one felt at 7:04 this morning.

Reports on the Wednesday night temblor can be found below.

You can examine our past items on seismic events off the West coast from our archive here.
Posted by . at 7:42 PM