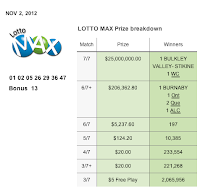 Friday Night's Lotto Max Jackpot has been split between a ticket purchaser  in the Northwest and a ticket holder in either Alberta, Saskatchewan or Manitoba.

The 25 million dollar winfall was the main prize of the weekly Lotto Max draw, a drawing for which ticket sales had mushroomed as the jackpot grew larger and larger over the last few weeks.

It marks the second time in the last year that a major Lotto Max prize will have been claimed by someone in the Bulkley Valley-Stikine region, with an Atlin resident winning the lottery back in February.

In addition to the giant jackpot there are a number of subsidiary prizes to be claimed, one of which will bring a 1 million dollar winfall to a Kitimat resident.

Should you have held a ticket on Friday's draw and of course, providing you aren't the big jackpot winner already making your travel plans, the remainder of the numbers can be found here.

Email ThisBlogThis!Share to TwitterShare to FacebookShare to Pinterest
Labels: Another large lottery winner in the Bulkley Valley-Stikine