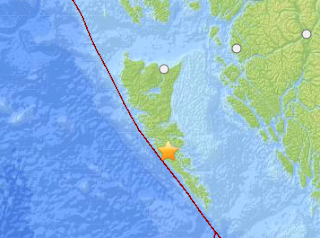 The Islands had three quakes rumble along the fault line running along their west coast over the last 24 hours, 2 quakes in the 4.0 range and another evening quake that was recorded at 5.1 magnitude, which occurred at 8:55 Monday night.

The Monday evening temblor was located 132 kilometres south of Masset, in much the same region as the many aftershocks from the October 27th quake.

The temblors on Haida Gwaii, were part of a string of quakes along the Pacific coast ranging from South America to the 6.4 quake in Gulf of Alaska earlier Monday afternoon, which has been followed by a number of aftershocks through the evening.

Further information on the rattling up and down the coast can be found at the USGS website.

Our archive of seismic activity on the North Coast can be found here.
Posted by . at 11:05 PM