There has been a second marine incident affecting transportation along the North coast, this one near Laredo  Sound south of Kitimat on Thursday. 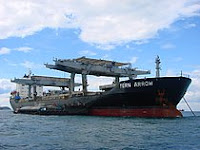 The incident was reported at 2:17 pm, in the midst of a strong winter storm in the region, it was severe enough, that the Tern Arrow was left drifting for three hours in the sound.

A situation that resulted in the Canadian Coast Guard  tasking the Gordon Reid to head towards the Tern Arrow. However, the Gordon Reid was allowed to stand down after the Term Arrow restored its propulsion, regaining emergency power three hours after it was left drifting in the Laredo Sound region.

The Tern Arrow then traveled to open sea on its emergency power, finally regaining its full propulsion at 3:07 am.

The Vancouver Sun was the first to report on the second incident, posting an item to its website on Friday afternoon.

It was the second incident in less than 48 hours for the North Coast, Tuesday night the German registered Hanjin Geneva, seeking to avoid a fishing boat, grounded on a sand bar on approach to Prince Rupert harbour.

At high tide, it was able to transit to Fairview Terminal for further inspection.

The twin incidents, have provided opponents of the Northern Gateway pipeline and terminal project,  with some talking points to further their goal of eliminating the prospect of oil tanker traffic along the north coast's waterways.

A number of British Columbia media outlets are framing the incidents in those terms, their recent items of note on the shipping industry highlighting the potential for trouble when it comes to the shipment of oil and bitumen out of north coast ports.