A new mystery after the Haida Gwaii quakes 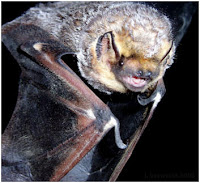 Add Bats to the list of things to research in the aftermath of last weeks 7.7 earthquake and the  many aftershocks on Haida Gwaii that followed.

Last week it was learned that the popular hot springs on the Islands had run dry, apparently it seems  shut down from the shifting of the plates underneath Haida Gwaii.

Now scientists are trying to figure out what may happen next summer when  a nearly extinct species of bats common to the region return to their birthing grounds, which happen to be at Hot Spring Island.

The CBC has details of the potential species changing situation, which sees some 40 Keen's myotis bats arrive every summer to have their offspring at the springs, one of only two maternal colonies that are known to the species.

The bats are attracted to the roosting area of the Hot Springs owing to the above average ambient temperature of the water that now used to flow under the Islands.

The Hot Springs drying up and now a potential disaster for a species is making last weeks earthquake one that is going to provide for much in the way of work and research for National and Canadian Geographic, not to mention the Discovery Channel.
Posted by . at 9:59 AM