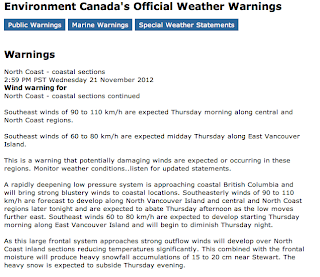 While Wednesday afternoon has remained rather calm, if a little cool, towards the midnight hours a change will come to the North Coast.

Environment Canada has issued a Wind Warning for the overnight period for the North Coast, with winds increasing in the early morning periods to gusting from the southeast to 30 to 50 km/h, increasing to 90 to 110 through the morning towards afternoon.

The winds will then diminish in the early evening of Thursday, reducing in speed to 30 km/h.

Rain will arrive on the North Coast with the landfall of the weather system. Anticipated rainfall will measure at 30 mm for Thursday, 15 mm for Friday, 20 mm Saturday and 15 mm Sunday, the winds will continue into Friday but with a reduced intensity. 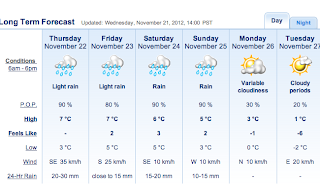 The weather system is part of a rapidly deepening low pressure system approaching the British Columbia coast, once the frontal system passes the coast it will move inland and then give way to outflow winds on inland sections of the North Coast.

The shift in the winds will reduce temperatures significantly in the inland regions and bring heavy snow to the Stewart area, with accumulations of around 20 cm.

You can review the forecast for from Environment Canada here.

Storm reports can also be found on Twitter at #bcstorm

Update: 8:30 AM Thursday... Storm had not arrived on the North Coast by Thursday morning, however Sandspit on Haida Gwaii was reporting sustained winds from the Southeast at 91km/h gusting to 117 km/h, Snowfall warning has been extended to the Kitimat area where 25 cm of snow are expected today.