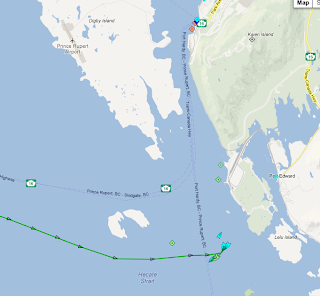 An incident at the approach to Prince Rupert Harbour has left the container vessel Hanjin Geneva awaiting high tide, after the container ship became grounded after trying to avoid a fishing boat when entering the harbour. 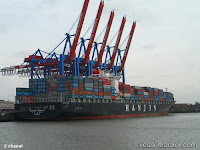 The incident took place at 10:30 Tuesday evening, no injuries were reported as a result of the grounding and at first review it does not appear that the vessel suffered any damage.

The Port and its various partners assessed the situation as it developed and continued to monitor developments into Wednesday morning.

The Hanjin Geneva, a German flagged container vessel, will be brought alongside Fairview once high tide arrives at 7:50 AM, at which time an inspection of the vessel is to take place.

The Port reviewed the incident through this press release.

Local and national media outlets began to report on the grounding as Wednesday moved on.

November 21-- Grounded Vessel Returns Safely to Deep Water
Posted by . at 7:28 AM