A win for the Dogs, a draw for the Cats and a warning for the Wolves

Viewers to Prince Rupert City Council's session of Monday night, might be excused if they thought that they had stumbled onto an episode of Animal Planet.

When Council wasn't expressing its thoughts on the required need of proper permits for backyard hockey rinks, they were dealing with a number of issues of interest when it comes to the fur bearing population.

While Council decided that the contentious feral cat issue should best be dealt with by a full council (three members were absent from Chambers on Monday), they had no such concerns when it came to the use of Doug Kerr field at the Civic Centre as a community dog walk park, a topic which received a quick run through before moving forward.

For those looking for some background on the issues we suggest a visit to the City's video and/or audio archives for the November 26th meeting. Featuring a handy reference on the various topics discussed in council chambers (you can review some of that session from our City Council Timeline) 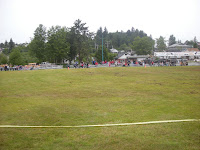 The Dog Walk issue can be found from the 41 minute to 45 minute mark of the Council session, with Council moving forward tentatively with the project to turn the old Doug Kerr ball field into a permanent Dog Park. All that remains to be determined is the financial aspects of the changeover and some of the housekeeping items regarding it, all of which would be put to the 2013 budget. City Manager Gord Howie reviewed the proposal for Council and it was his recommendation to council to give its approval to the site as a favoured location for a Dog Park.

The feral cats of the city didn't quite get as much action on Monday night, with Council deciding defer any discussion on the issue until a later Council session. Thus the request by the Cannery Road Animal Shelter for the City Council to reconsider the SPCA's request for $7,500 dollars for a spay, neuter and release program as well as the Cannery Road quest for feral cat feeding stations, was tabled until a future Council meeting with fuller attendance. The Feral Cat discussion can be found at the 59:30 to 1:02 minute mark.

One final item of note considering animals was brought up on Monday night, (from 1 hour nine minutes to 1 hour 10 minutes)through Councillor Ashley, the absent Councillor Carlick-Pearson asked Council what steps local residents should take, if they are concerned with the growing appearance of a wolf population within the city limits.

Mr. Howie advised that for the most part it is an issue for Conservation Officer Service, advising that residents with concerns should contact that government agency at their toll free number of 1-877-952 -7277, or if of immediate concern to contact the RCMP detachment.

And with that helpful advice, the Animal Planet review was done for November.
Posted by . at 2:28 PM