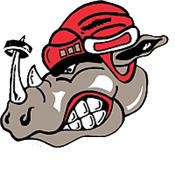 The Kitimat Ice Demons played the role of party poppers on Saturday night, as the visitors offered up an example as to how they have become a CIHL powerhouse for the over 800 always boisterous Rampage fans at the Jim Ciccone Civic Centre.

The Ice Demons were the guests for the home opener for the Prince Rupert Rampage, kicking off the home sides 2012 home season, a much anticipated return to CIHL hockey in Prince Rupert for this year.

The visitors battled back from a 2 goal deficit to score four unanswered goals in periods two and three, claiming a 5-3 victory over the Prince Rupert Rampage, who returned to the Jim Ciccone Civic Centre for the first time since last year's playoffs.

Due to ice troubles at the Civic Centre earlier this fall, the Rampage played the first five of their CIHL games on the road. Making for a long hard tour of the province before returning to their friendly confines at the Jim Ciccone.

After a scoreless first period of feeling each other out, the Rampage got on the scoreboard in the second period, scoring a flurry of three goals in response to Kitimats' opening salvo four minutes into the period.

Finding the range for the Rampage were Tom Robinson at 6:39, Kory Movald at 11:50 and Sid Spracklin at 14:40 of the middle frame, the surge of goal scoring gave the Civic Centre faithful hope for a home ice victory, however the Ice Demons turned on their offensive game, to take the lead into the final period, never looking back

Kitimat showed why they are among the top of the CIHL standings,  scoring their final four goals spread over the second and third periods, which turned the momentum of the game to their side and secured yet another win for the Western Division leaders.

Keano Wilson took the loss in the Rampage nets, facing 35 shots on the night.

The loss drops the Rampage record to 1 win, 3 losses and an OT shoot out loss, leaving them at the bottom of the standings at the moment in the CIHL West.

Prior to the game, the Rampage announced that Jared Meers would wear the "C" for the rest of the season, named the team captain prior to the puck drop on Saturday night. The team shared the news with their fans on the team's twitter feed.

While they may have lost out on the two points in the standings, the Rampage goal scoring blitz of the second period provided a bonus for the Salvation Army, as part of the Port of Prince Rupert's sponsorship of the team this year, 100 dollars for each Rampage goal was donated to the local charity.

Meaning that Saturday was a 300 dollar night for Salvation Army's social programs in the city.

The Rampage are back on the road on Saturday and Sunday with a road trip taking them to Houston and Smithers.

The next home game is set for Saturday, November 24th when the Rampage return to the Jim  when Williams Lake comes to town, followed by Quesnel on the afternoon of Sunday the 25th.

Those next home games will mark the start of a string of 8 home dates through, November, December and into January.