Don't give up on that Teenburger craving just yet! 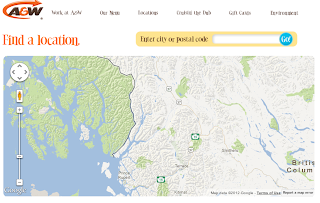 The last we heard, the bid to bring A & W back to Prince Rupert had run into a wee bit of difficulty, the preferred location of the Upper Level of the Rupert Square providing for a troubled path to construction.

Or as the folks at A & W put it, "those plans fell through".

However, if a small item on page 12 of the E-edition of the Northern View (an item that somehow missed the blazing Breaking News banner of the web site for the paper) is any indication, A & W is still working towards its goal of a restaurant in the city by 2013, though perhaps in a different location.

According to the Northern View piece, negotiations into a particular piece of land in the city are ongoing, though owing to the sensitive nature of those negotiations, the location of the land will be held between the two participants it seems.

Meanwhile, over at the Rupert Square, it appears that the Mall Administration believes it's still in the running to play home for the Papa, Mama and the Teenburger.

Burger fans no doubt aren't too concerned about where they have to go to pick up their Burger, Fries, Rings or Root Beer, just as long as sometime in the next year they have a place to go pick them up.

A look at the path to the teen burger..

Email ThisBlogThis!Share to TwitterShare to FacebookShare to Pinterest
Labels: A and W continues its plans for Prince Rupert