6.4 temblor for the Gulf of Alaska 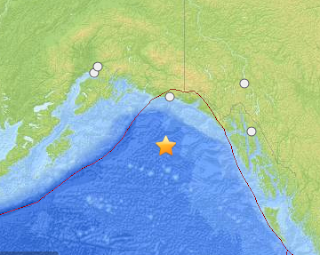 The latest in seismic activity along the Pacific coast has rattled the Gulf of Alaska, as a 6.4 magnitude earthquake was reported at 11:42 AM Alaskan time, 12:42 PM Pacific.

The epicentre of the quake was located 544 kilometres south of Anchorage and 549 kilometres West South West of Whitehorse, Yukon.

There are no reports of anyone on either Haida Gwaii, or the North Coast feeling the latest jolt to the pacific plates.

Since the initial 6.4 quake at noon hour, there have been a number of after shocks reported in the same region ranging in the 3 to 4.2 magnitude range.

No tsunami alert was issue for Alaska, British Columbia, Hawaii or the West Coast of the US in the wake of the latest quake.

Further information and a tracking of the aftershocks can be found on the USGS website.

The Pacific fault lines have been dotted by increased earthquake activity over the last few weeks, you can examine the past events on Haida Gwaii and Vancouver Island from our archives.