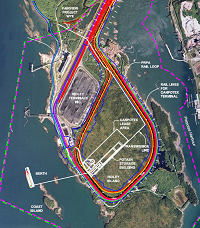 More welcome news for the North Coast, as the long anticipated Canpotex Potash Terminal development took another major step forward this week, with word that Peter Kent, the Canadian Environmental Minister had approved the project, finding that it was not likely to cause significant adverse environmental effects.

His announcement comes after Canpotex completed and submitted it's Comprehensive Study Report for further review of the Canadian Environmental Assessment Agency, which issued this press release yesterday.

The project has long been on the Prince Rupert radar, dating back to 2008 and has been frequently mentioned as a key part of rebuilding the North Coast economy.

While no official word from Canpotex as to a timeline moving forward has been revealed as of yet, the environmental assessment approval is a major step towards development.

Having weathered international economic storms, corporate intrigue and bureaucracy, it appears that it may be yet one step closer to becoming part of Prince Rupert's Industrial base.

Our archive of recent Canpotex items can be viewed here.