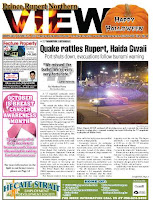 The local weekly newspaper has a new publisher in the office, the introductions being made to the readership on Thursday, through the Northern View's website.

In an item posted to the online portal for the paper, Black Press introduced Todd Hamilton, who most recently worked in Manitoba and returns to the company and the Northwest for that matter, having been publisher and editor of the Smithers based Interior News three years ago.

He took over his Prince Rupert duties earlier in October, and has provided a bit of a preview as to  where he believes the Northern View will be positioned in the community going forward, from the introductory piece we learn that The Prince Rupert Northern view will "not only be a mirror of this community, but also to serve as its loudspeaker"

And if some casual reading of the recent efforts of the Northern View are any indication, it seems that both editorial and news stories have reinforced that positioning point.

In two separate  items regarding the recent Haida Gwaii earthquake, the Northern View has tended to reinforce its thoughts on the publication's importance to the community.

Both in editorial form:

What would have happened?

"We here at the Prince Rupert Northern View are happy to be the place people can go for the latest news and information, and thousands of people turned to our site during the earthquake for information and updates."

And in the body of the story covering the earthquakes aftermath

The Northern View was among the first online to alert Prince Rupert to not only the confirmation of the earthquake but also the tsunami warning. Nearly 10,000 unique visitors logged into www.thenorthernview.com for its coverage and alerts.

One imagines that the focus of the news delivery will continue to be more on their online presence, which serves the public well for quicker responses to breaking news and items of concern.

The more traditional newspaper option trending towards being more of a historic document for folks that like to clip out pictures and items about their friends and family.

Since the demise of the Daily News a few years ago, there have been gaps in the coverage and background of important stories in the community, with local residents having to seek a variety of options for their information requirements.

There is however, still a fair amount of competition for the Northern View in their quest to be the "Go To" news service in the community

With radio both public and private, television and the wide range of social media options available as well, the cause of serving the community will surely be spread out among all the media and non media possibilities in the region.

The key to the Northern View's success will be its ability to keep the focus on the local aspect of the community, while many of its competitors are more regionally based and reflective of that larger landscape.

One final interesting note from the introduction was perhaps the reassurance to the staff and readership of the paper, that "all current Prince Rupert Northern View staff are being retained."

Leaving us to wonder to the status of Alan Hale, the now apparently former journalist with the Northern View, who seemingly offered up his last contribution to the paper on September 22nd.

Like many journalists and broadcasters in the community before him, (CFTK's former news journalist Grace Sullivan likewise vanished from the local TV news gathering business over the summer) Hale seems to have wandered into the news fog with nary a farewell column, nor indication as to what future endeavours he may be set to pursue.

Just another case of the here today, gone tomorrow cycle, that seems to mark much of the Northwest media scene