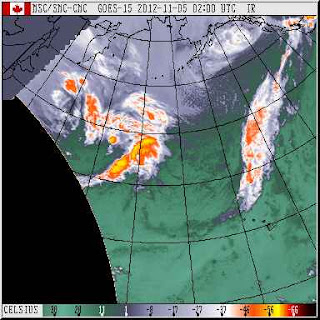 Sunday's windstorm crossing from Haida Gwaii, through the North Coast and into the inland regions of the Skeena Valley left some communities with sporadic power outages across the Northwest, resulted in flight cancellations at regional airports and has provided for a holding pattern for BC Ferries.

BC Hydro had a number of power disruptions listed on its Power Outages List for Sunday afternoon/evening as the winds gusted through as the storm front moved through the various regions.

From Port Edward to Kitkatla, Haida Gwaii, Kitimat and Smithers, BC Hydro dealt with wind storm effects that knocked the power off, in some cases for hours at a time .

The largest however was an afternoon power outage reported in Terrace, that at one point affected close to 3,700 residents. Most of the power had been returned to that city by 6 PM.

While lights occasionally flickered and/or dimmed in Prince Rupert, no widespread outages were reported in the area during the course of the Sunday winds.

Power outage updates can be accessed from the BC Hydro website

Transportation options were also affected by the windstorm, Air Canada Jazz flights out of Prince Rupert were cancelled and the morning flight to the city was diverted owing to the strong gusts in the region through the day. 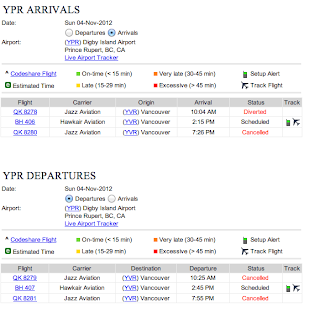 A number of, but not all, of Air Canada  flights to and from Sandspit,  Smithers and Terrace all suffered a similar fate of cancellation as the day progressed.

Hawkairs' early flights of the day from Terrace and Smithers took flight, however evening flights out of Terrace and Prince Rupert have been reported as delayed.

The latest Flight information for the Prince Rupert Airport can be found here while Arrivals and Departures out of Vancouver International Airport can be accessed here.

BC Ferries schedule also faced challenges through Sunday, with the inter Island Ferry MV Kwuna on Haida Gwaii held at dock at Alliford Bay until the winds subsided.

Further updates on the BC Ferries Service Notices can be found here.

Local media reports on the windstorm of November 4