Fire Bans Now in place across much of the Northwest

While the North Coast portion of the Northwest has been spared the blistering heat of the last week, many communities from Terrace through to Prince George have been baking in the hot summer sun.

And from all that heat come tinder dry conditions for many forest areas of the Northwest and points eastbound, with the Wildlife Management Branch putting in place a number of fire bans for the much of Northern British Columbia effective today.

While the conditions of the Northwest are not as dire as those of the Prince George Fire Centre and further to the south into the Kamloops Fire Centre region, the situation remains of concern across the Highway 16 corridor as well.

There is one major fire of concern currently burning in the Northwest, with Wildfire Management Officials keeping a watchful eye on the Chelaslie Arm region of the Bulkley-Necacko District.

With the Fire Danger in the Northwest Fire Centre listed as High to Extreme, the quest to reduce any human caused fires is now underway.

Yesterday, the Northwest Fire Centre outlined the prohibitions on open fires and campfires tha t go into effect as of 4 PM Thursday.

Among the activities now banned are:

-- Category 2 Open Fires
-- Category 3 Open Fires
-- Campfires, as defined in the Wildfire Regulation
-- Outdoor Stoves and other portable campfire apparatuses that are not CSA or ULC approved
-- Open Fires in an outdoor stove
-- Fireworks, tiki torches and Sky Lanterns

Those prohibitions continue until September 15th or until the public is further notified.

The affected region of the Skeena Forest District can be reviewed from the map below: 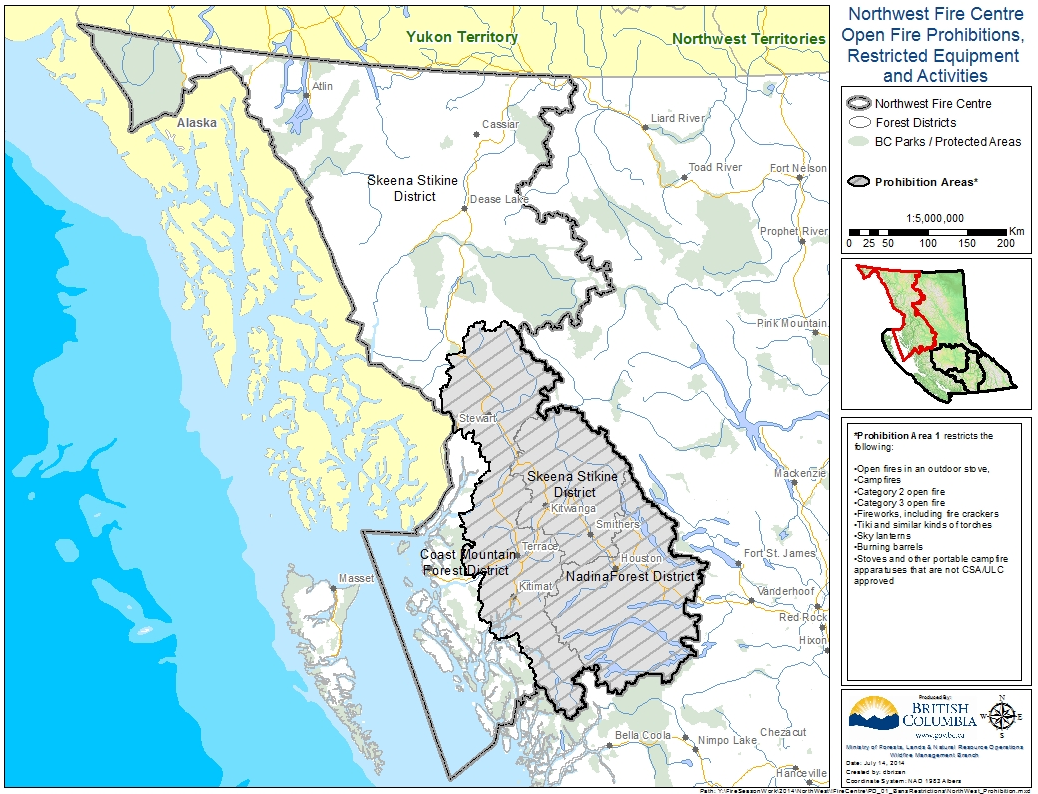 Beyond the obvious dangers posed by ignoring the fire ban, the cost to those that do will be stern.

Anyone in contravention of an open fire prohibition could be issued a ticket for $345, if convicted in court, those who ignore the ban face a fine of up to 100,000 dollars and could be sentenced to one year in jail.

Should the contravention of the fire ban lead to or contribute to a wildfire, those responsible could be subject of a penalty of up to 10,000 dollars and be ordered to pay all firefighting and associated costs.

With conditions as they have been in recent days, the Northwest Fire Centre relies on reports from the public to provide proper action to any opportunity for a wildfire to start up, to report a wildfire or unattended campfire you can call 1 800-663-5555 or *5555 on a cellphone.

Updates on the latest wildfire situations across British Columbia can be accessed through a variety of social media options, with details available through the Wildfire Management website, twitter feed or facebook page.
Posted by . at 12:55 PM