When it comes to the Watson Island proposal, few details yet to be delivered

Perhaps it's just a matter of asking the right question, or maybe with the first opportunity of a public forum, the City may volunteer a bit more background when it comes to the July 16 exclusivity agreement with a company that wishes to develop a small scale LNG terminal at Watson Island.

The topic does not appear on the Agenda of items for Tonight's Prince Rupert City Council session, but the evening could offer two opportunities for a bit of disclosure from the Mayor and Council if they are inclined.

The first through the Committee of the Whole session, which allows for public questions. Where perhaps an inquisitive citizen may pose a question that allows for the City to shed a bit of light on the plans of Watson Island LNG and what that company offered that made their proposal so tempting for the City of Prince Rupert. 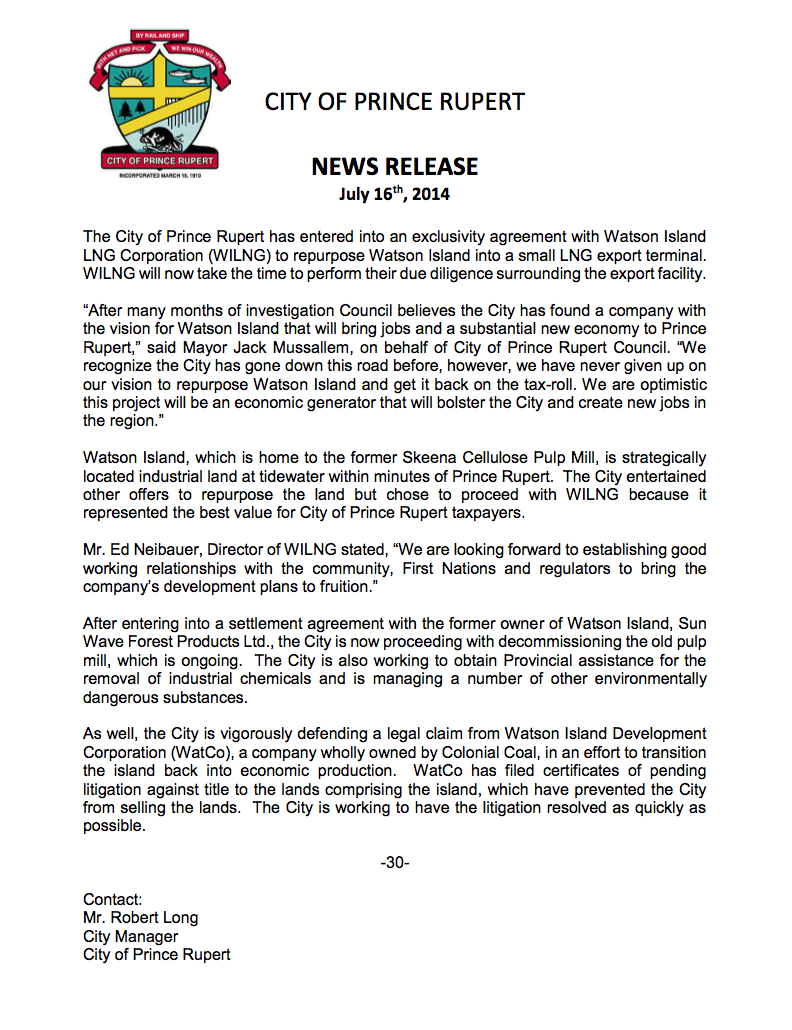 If Rupertites remain shy during that public opportunity, there is always the Regular Council session where perhaps one of our six elected councillors may wish to act as our advocates in the quest for just a bit more information.

When it comes to the proposal and the exclusivity agreement that was first announced last week by way of a press release from the City, there really hasn't been much in the way of expansive review of what to expect moving forward.

The plans of WILNG as the proposed developer is called, seem fairly limited for the moment when it comes to their proposal for a small scale LNG development on the Watson Island site.

That small scale of project on its own might raise a few eyebrows, considering the cost recovery issues related to the large scale proposals already in the works for the region. Many might wonder how a small scale LNG project would generate enough revenue and provide for a high level of employment in an industry where it seems that large and expensive is the norm.

Perhaps Council might be able to advise if or when the proponents behind WILNG, are preparing to provide for an open house or public presentation on their proposal,  similar to many of the other LNG proponents that have done so.

A review which would better outline their project and what the region may anticipate from it.

The July 16th media announcement does seem to provide for the need of more information, particularly when it comes to such issues as a timeline of development, financial backing for the project, export contracts for the LNG when shipped or supply of gas to feed the terminal, just to name a few of the many questions that pop into mind when it comes to LNG.

Last week, the weekly paper reviewed that there may even be questions when it comes to access to the site by LNG ships, something that if not addressed, would probably bring the export terminal project to a fairly quick end.

From the City side of the discussion, other than the usual statement as to the goal of returning Watson Island to the tax rolls and its hoped for return as an active economic engine, there had been little in the way of an update on that file of many layers.

The Mayor touched on the ongoing legal proceedings regarding the site, but did not provide any timeline or update on progress on those issues.

Likewise, the City mentions that they are seeking assistance on the wish to remove some of the environmental problems from the site, yet again there is no particular listing of the steps they are taking to address the situation.

No mention of the results of any meetings with government officials, or even if Jennifer Rice, the region's NDP MLA has been enlisted lend a hand and to try and find some movement from the provincial government on the issue.

The media release of last week seems to have left us with more questions than answers when it comes to the developments from every one's favourite coffee shop topic of "what's going on with Watson Island".

Public sessions of Council and the opportunity for more information seem few and far between in the summer months, tonight's is the first gathering of our elected officials in three weeks, with the next one not scheduled until the third week of August.

If City Council is looking to engage the public in their approach to the issues of Watson Island, Council's session of tonight offers up the podium for a timely explanation of the City's side of the latest news from the island.

There are more items on the Watson Island file available on our archive page.