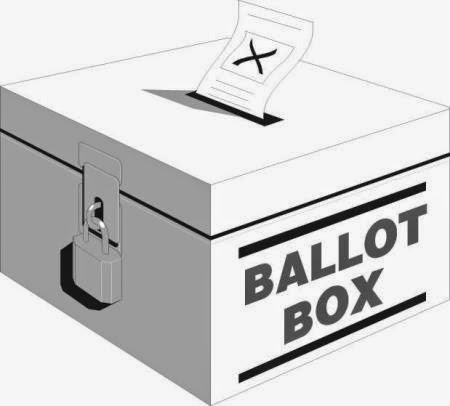 November is still a fair way off in the distance, with hopefully many more sunny days to still to play out before we hit Labour Day and our thoughts turn to issues other than what to put on the BBQ tonight.

However, as we outlined on the blog back in May, with 2014 a Municipal Election year, it would seem that the race for the Mayor's office is already underway,

The incumbent, Mayor Jack Mussallem  has in recent weeks provided for a bit of advertisement in the weekly newspaper.

Offering up short missives to remind the population of his experience, the many facets of his personal work ethic and oh yes, did we mention experience?

The latest ad for Mayor Mussallem arrived in last evenings weekly recap of events from the Northern View. A page thirteen, corner advertisement that comes complete with a new set of focus points and featuring a picture of Mr. Mussallem in his best Mayoralty finery.

The tone of which again seems to suggest that there may be a bit of worry in the Mussallem camp, when it comes to the arrival of Lee Brain, a relative newcomer on the local political scene.

While not mentioning Mr. Brain by name in his ads, considering that he is the only other declared candidate in the upcoming fall race, the tone of Mr. Mussallem's ad buys is clearly working to highlight the Mayor's time in office, compared to Mr. Brain's relative inexperience on the municipal scene.

Over the course of his initial ad campaign thus far, the Mayor has made frequent mention as to how the job of Mayor is not one that is for Beginners.

An indication of what may be the theme of the Mayor's campaign right through until November.

And while the Mayor embraces the concept of the corner page ad, he is also finding that more and more of his talking points from City Hall seem to be making it into the local news media more often of late.

Items which in many cases, offer him the chance to set a theme without much in the way of intruding questions.

Something that is probably quite helpful towards the current focus of his early campaigning.

The challenger for his part has been biding his time with a social media approach, making use of a facebook page Lee Brain for Mayor,  to keep his profile high around the community.

It so far has provided for a forum mainly for those that support his causes and for for those that wish to offer up their enthusiasm for his prospective campaign.

To date, the contributions from the candidate himself are rather thin on actual information.

With few topics of note as to what he might have to offer the local community and how he would steer the Corporation of the City of Prince Rupert.

In one of his recent facebook postings, the challenger  offers up his thanks to those that have offered their support or ideas to this point, he goes on to make note of the summer season, with the promise of a more comprehensive review of his message to come in the fall. 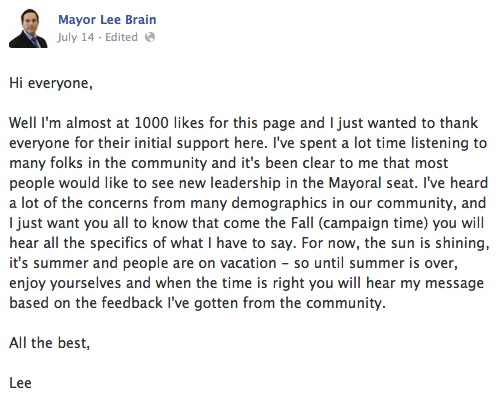 The two approaches offer up a glimpse as to how both candidates seemingly approach the process of delivering their message to the public, with the Mayor content to make use of the old style media strategy of newspaper advertising and occasional news clip appearance on CFTK TV.

Mr. Brain on the other hand, is more engaged with those more comfortable with electronic and social media.  Particularly among those who make frequent use of such forums as facebook pages or twitter, where the #PrinceRupert theme provides more and more interesting items for consideration.

As we move closer to the full out campaign post Labour Day, it will be worth watching to see how each campaign evolves when it comes to their information process.

Of course by that time, the two candidates currently seeking the office may find that there's a bit more competition in the weekly papers ad buy rotation, as well as from the work of Facebook likes and twitter retweets.

Rumblings persist that other candidates are weighing their decision whether to enter the race in the fall.

Some of the names that have been rumoured as ruminating on their political future offer up the prospect  of past experience on local council and a high profile within the community.

As we head towards Labour Day, the pool of prospective Mayoralty candidates may grow significantly.  Something which may provide for another shift in focus on the issues and offer up more options as to who may be best suited to hold the reins of Civic Government after November 15th.

For more related to these early days of the Fall 2014 election campaign, you can review our archive of items here.

Email ThisBlogThis!Share to TwitterShare to FacebookShare to Pinterest
Labels: Mayoralty campaigning in the summer season July 2014