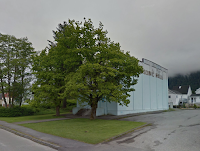 If the Masonic Hall members take the advice of City Council, they will be hosting an information session in the next few weeks outlining for those in the surrounding area the nature of their request for a zoning change for the hall, looking to allow for storage for a local furniture store.

The proposed change was brought to City Council on Monday evening by City Planner Zeno Krekic, who provided some background on the request and added some of his own professional concerns related to such spot zoning changes around the city.

He also offered up some thoughts on the nature of service groups and organizations such as the Masonic Lodge in the community and how they are seeking to raise revenues while facing dwindling participation of membership.

The plan if approved by Council would see a portion of the Masonic Hall converted to storage space, with a loading dock to be located at the back of the building, making use of the lane leading to Sixth Avenue as the main access point to the storage space.


While Councillor Niesh shared some of the concerns that the City Planner had related to the zoning issues, advising that he had discussed the topic of use with one of owners of the furniture store and then suggested that a residential area is not a location for large rigs to be loading and unloading.

However, a larger number of Council spoke in support of the proposed zoning change and re-purposing of the assembly hall area suggested for storage.

Councillor Cunningham noted how it's only first reading and that Council recently dealt with a similar issue related to storage space, adding that the neighbours will have an opportunity to offer up their opinions on the proposal.

Councillor Kinney noted that the had discussed the topic with some of the neighbours in the area and had not received any negative reaction, while Councillor Randhawa called attention to the support for small and local business that many of the Council members offered during the Municipal election campaign.

"Well it's only First Reading,  it's just opening up the process, let the neighbours decide, it's their neighbourhood it's strictly a storage space, we just went through this with another facility for storage and I don't really have a problem with it, if the neighbourhood agrees with it   -- Councillor Barry Cunningham speaking to the request from the Masonic Lodge for a change in zoning for a portion of their assembly hall.

Council then voted to move forward with first reading, but noted that the Masonic Lodge will have to hold a community meeting to outlined their plans with the neighbours before the process moves any further forward.

You can review the full proposal from the Agenda Package from Monday evening, outlined from pages  .

Background on the discussion from Monday night's Council session can be found on the City's Video Archive, it runs from the 45 minute mark until the 1 hour one minute point.

For more items related to City Council discussions see our archive page here.
Posted by . at 11:09 AM